SPOTLIGHT - The Day of the Orphan by Dr Nat Tanoh 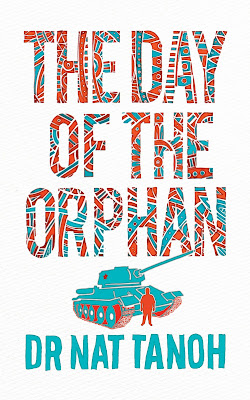 BLURB
Like many eighteen-year-old boys, Saga’s prime concerns are: listening to music his mum calls “hop-hip”, learning about girls from his suave best mate Ibrahim, and making sure his considerable tummy is well-fed. In his affluent, liberal and relatively protected suburb life is pretty good, especially when his mum’s special peanut soup is on the table.

However, in Africa, childhoods can be snatched in an instant, especially when you live in a dictatorship. When his friends and family are dragged into the conflict, he is given no choice. Chubby Saga becomes an unlikely revolutionary, but these are very dangerous times. Their violent President Brewman has built their country on fear and even he, himself, is terrified. Spies, traps and double-dealings lie everywhere. Can one happy-go-lucky schoolboy really stand up to a murderous regime? How long can he stay one step ahead of the Zombie soldiers that will do anything to stop him?

This thought-provoking coming of age story touches on many of Africa’s biggest problems today.

Excerpt:
After the quasi-formal welcome, the headmaster and form master hastily stood aside, moving backwards towards the blackboard so the Deputy Minister could take over by posing his questions directly to the students as part of his verification process. The bodyguards also placed themselves at the two front corners of the classroom behind the Minister, and commenced an inexplicable process of touching their earpieces with equally inexplicable regularity.
Mr Com, who now had the floor, asked if anyone would volunteer to go first, and a still very annoyed Saga impulsively raised his hand before any of the others could. The New Patriotism issue was indeed a very sore point with Saga. He was still plagued with guilt that he had not been present to defend his bosom friend, Ibrahim, when he was beaten up badly by New Patriotism fanatics who happened to be students in their own school. Subconsciously, it was as though he thus felt the urge to be the one to face any New Patriotism ‘onslaught’ from officialdom within their school. As to how he would deflect such an onslaught, he had absolutely no idea. It was a subconsciously inspired impulsiveness so he simply had to wing it.
‘Well, well – I see we have an eager beaver in our midst,’ he smiled at Saga, who did not return the smile. The headmaster, and the form master, and all the five men and one woman who made up the Minister’s entourage, however, giggled rather obsequiously at this sally. They truly understood the meaning of grovelling to those on high. The Deputy Minister turned and rewarded them all with an openly condescending smile.
‘Okay mister serious young man, let’s start. So, tell me, who is your mother under our New Patriotism?’ Mr Com boomed out his question.
Saga knew the answer he was to give and did so correctly. ‘My mother is the Great South Party of President Brewman!’
Mr Com was pleased. ‘Not bad, not bad,’ he said, and nodded happily towards the headmaster, who gave an equally satisfied beam in response.
‘And who is your father?’ Mr Com boomed yet again.
Saga again answered correctly. ‘My father is the Great Leader of our nation, His Supreme Excellency and President-For-Life-Until-Further-Notice Field Marshal Brewman.’
Both Messrs Com and Money now beamed in unison. The entourage and form master were not far behind in this beaming effort.
‘Well done my boy, well done.’ Mr Com smiled a vastly complacent smile at Saga.
‘Tell me, my bright, young friend – so what would you like to be when you grow up?’
This was far from being a question about future careers such as wanting to be a doctor or lawyer or pilot. Saga knew he should answer something along the lines of wanting to grow up to be a dedicated follower of the President or the Party. However, Saga inhaled and dropped his bombshell. ‘I would like to be an ORPHAN when I grow up,’ he said with utmost seriousness.

Author Info
Dr Nat Tanoh comes from Ghana but grew up in exile, as a child, in England due to his parents’ opposition to the installation of a one-party state. Today he divides his time between England (London) and Ghana. He has a rich history of involvement in student and workers movements, which originally emerged from struggles against the institutionalisation of military rule in Ghana. Dr Nat has since worked as a consultant on development projects in Ghana and elsewhere in Africa. He also continues to uphold a passion for democratic social development.

The Day of the Orphan is Dr Nat Tanoh’s debut novel. 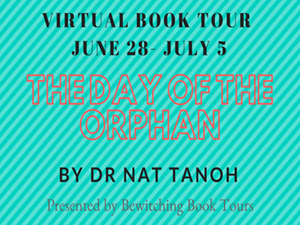