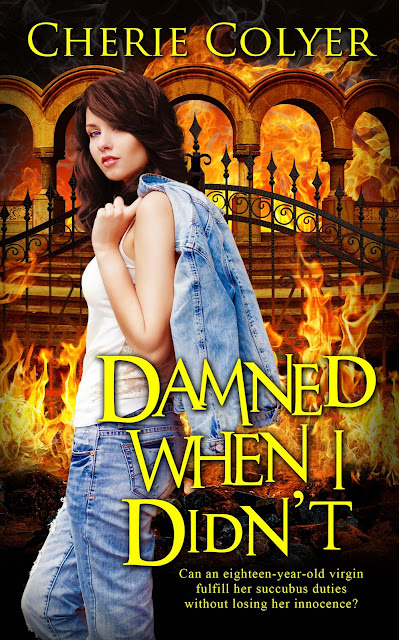 Tagline: Can an eighteen-year-old virgin fulfill her succubus duties without losing her innocence?
BLURB
Death isn’t the end for eighteen-year-old Avery Williams, and her final resting place isn’t beyond the Golden Gates. No, the Queen of the Damned has plans for her and, unbeknownst to Avery, fought hard to gain possession of her soul.
As Hell’s newest succubus, Avery is expected to siphon life from the living. It only takes a long, meaningful kiss, but for a virgin like Avery, kissing guys she barely knows isn’t something she’s comfortable doing. Avery focuses on the upside of her fate—she’ll be returning home, or so she thinks.
When the Queen of the Damned cuts her off from her old life, Avery is determined to find a way back to her family and friends, even if it means facing Hell’s fury if she’s caught.
Amazon      BN     Apple      Google Play     Kobo     Books2Read
Excerpt
We got to Brookfield Zoo around ten, and even though I had forty dollars in my purse, Cole insisted on paying for the both of us. We entered through an underground tunnel that led to the main entrance. Images of ostriches and lions watched us pass as we followed the crowd to the turnstiles.
Cole handed a heavyset guy in a blue uniform our tickets and then held his hand in front of him.
“Ladies first.”
“Thanks.” I tucked my hair behind my ear and asked, “Are you sure your friends won’t mind me tagging along?”
During the drive over, I envisioned Cole’s friends as a group of unruly demons. I couldn’t believe I hadn’t asked him what to expect when he first mentioned getting out of the apartment. When I voiced my concerns to Cole, he let out a loud guffaw. A minute later, he assured me there wouldn’t be a demon in the bunch, except for us. He also told me that Luz was psyched to meet me. She was tired of being the only girl in the group.
Cole and I headed toward a large water fountain at the center of the zoo. A boy wearing a lion sun visor held his little hands up as if they were paws and roared. His sister—who was about half his size—screamed. I couldn’t help but laugh. Then I remembered Cole’s comment back at the apartment.
“Are you really a fan of leopards?” I asked.
“Snow leopards,” he corrected. “They’re smaller than other wild cats, but they’re graceful, cunning, and exceptional survivors.”
I got the feeling he related to them on a personal level. Cole had said incubi were low on Hell’s totem pole of bad asses.
“What’s your favorite animal?” he asked.
I tapped a finger to my lips. “Hmm—”
He jumped in front of me, walking backward with a bounce in his step. “Don’t tell me. I’ll guess.”
I giggled. Cole’s behavior was so human it was hard to believe he was a demon. But then again, so was I.
“You’ll never guess.”
He tipped his head to the side. “Is that a challenge?”
“Maybe,” I replied with a smile.
He slowed, avoiding bumping into a stroller even though his back was to it.
“How’d you know they were there?” I whispered, fully expecting to be told that demons had the radar-like senses of a shark.
“Reflection in your sunglasses.” He wiggled the ones he wore.
Darn on the supernatural radar, or lack thereof.
“Where were we?” he asked.
“You were about to admit there is no way you’ll guess my favorite animal.”
“You think so.” Cole smirked. “Let’s make it interesting…winner sleeps in the bed tonight, his choice if he wants to share.”
“Or hers, and just so you know, I’m not sleeping in the same bed as you.”
“You did last night.”
“I was passed out due to being drugged. It doesn’t count.”
I hadn’t given much thought to the fact that Cole and I shared everything in a one-bedroom apartment. “Does the couch pull out into a sofa bed?”
“Nope. I usually don’t have company sleep over. I discovered last night you’re a cover hog.”
Since most mornings I woke tangled in the sheet, I knew better than to argue with the latter statement. “Don’t you have girls over?”
“Definitely not. Except Luz, but she’s a friend and doesn’t stay the night.” His expression became serious. “No bringing work home. House rule.”
I didn’t plan on hooking up with anyone, so that rule was fine by me. “Deal.”
His lips curved upward into a devilish smirk. “Which one: you won’t bring strange guys home, or you’re willing to risk losing dibs on the comfy mattress?”
I began to think Lilith had purposely paired me with Cole as a way to add to my own personal Hell. He was seriously charming and—had we been human—the type of guy I went for.
But he’s not human, and the only reason you find him charming is because he’s the only person you’re still allowed to talk to.
Even Gregory Davis—the geeky brain from school with thick black glasses and a never-ending supply of sweater vests—would look appealing when you’re staring down eternity and he’s the only person you know.
I shook my head to clear my runaway thoughts and replied with confidence, “Both.”
“Be prepared to lose.” He turned and fell in stride with me. In a low voice, he said, “Luz, Nick, and Dylan are human. Hunter’s something else.”
I stopped. “What’s Hunter?”

Author Info
Professional network technician by day, novelist by night, Cherie lives a quiet life in the Chicago suburbs with her charming husband. She has four amazing sons who she loves dearly. Cherie magically weaves together stories with a paranormal twist. She’s the author of the Embrace series (Embrace, Hold Tight, and Entwined), Challenging Destiny, Damned When I Didn’t, and Friends to the End. She waltzes into the adult novel world with this enchanting holiday romance, Merry Little Wishing Spritz.

What mindset or routine do you feel the need to set when preparing to write (in general whether you are working on a project or just free writing)?

I do my best writing in the mornings. The house is quiet, I’m well-rested (most of the time), my creative juices are flowing, and I have a fresh cup of coffee with a generous splash of hazelnut creamer.

Do you take your character prep to heart? Do you nurture the growth of each character all the way through to the page?

I do. I think it’s important for a character to be well-rounded. They need to have a past, dreams, strengths, fears, and so on. We learn a lot about Avery and her past in the book, and she grows as a person, or maybe I should say demon, as the story progresses. She has to, if she hopes to survive her new life.

Do you people watch to help with development?

I people watch all the time. And I weave in personality traits of people I’ve met into my characters. This helps to make each character unique. I can picture them better, which allows me to imagine how they’d respond in different situations.

Do you have a character that you have been working on for a long time that still isn't quite ready, but fills you with excitement to work on the story?

Oh yes! There is a book I started some time ago with characters that I have so much fun writing about, but I haven’t finished the book. I really should go back to it one day.

Can you share your next creative project(s)? If yes, can you give a few details?

I have a paranormal romance, Salted Caramel Bliss and a Wedding Kiss, coming out this summer. It’s part of The Wild Rose Press’ One Scoop or Two series. Short blurb: Seer and witch Peyton Woods isn’t sure why her latest visions feature a man and boy she’s never met. Determined to find out, she casts a spell that leads her to a small beach town in Maine and, to her utter surprise, the man who broke her heart eight years earlier. Peyton's left with one question. Why didn't her magic show her him?

I also have been working on edits for a middle-grade fantasy. In Atticus Everheart Fifth Grade Tutor…and Monster Hunter, a monster-fearing boy must face his fears if he hopes to make it out of Dracula’s manor alive.

What are some of your writing/publishing goals for this year?

I’m hoping to finish the newest paranormal romance I’ve been working on, but it is still in the plotting phase. And I’ve been playing around with ideas for a sequel to Damned When I Didn’t.

If you could spend one-week with 5 fictional characters, who would they be and where would you spend that time?

As for the where, I’m thinking Universal Studios, Florida.

Where would you spend one full year, if you could go ANYWhere, money is not a concern? What would you do with this time?

I would love to spend a year in Europe. I’m not sure where I’d start. Maybe in Italy, since that’s where my grandparents are from. I’d want to visit Greece, Romania, England, and France. If I travel by car, I could visit all the countries in between. There is so much history there, I’m sure a year won’t seem like enough time, but I’d love to have the opportunity to find out.

Thank you for sharing with us today. Mornings are quiet at my home also. Get lots of work done. 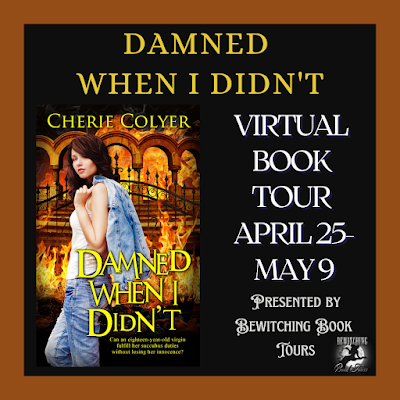