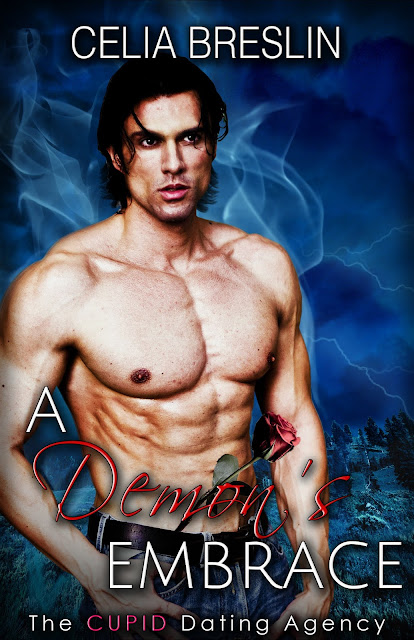 Tagline: She believes him the enemy. He's determined to prove her wrong.
BLURB
Former relic-hunter and soldier for Hell, Stryker spends his days of redemption running a holiday store in a cheery little town in the California wine country. He’s not complaining. The gig puts him across the street from his one and only heart’s desire—a blue-eyed angel with a clever brain, a hot bod, and the wickedest right hook this side of Heaven. Too bad his delectable Angel Cake won’t give him the time of day.
Warrior-class angel and restaurateur, Zara keeps busy designing interesting foods and beverages for the eateries and gym she owns with her celestial teammates. She certainly has zero time or interest in the annoyingly sexy, darkly bronzed demon who drove her bonkers for eons while working for the other side.
But then a freak storm complete with hell beasties rampages their hometown, and God and the cupids order the pair to team up to investigate. Frustrating news for Zara. Fantastic for Stryker. His new mission? Show his feisty angel their partnership is meant to extend far beyond this one job for Heaven...

Stryker and Zara's First Kiss...
Location: Charon's boat, River Styx, the Underworld...
...The boat heaved upward as if struck from below, sending her airborne. Before she could conjure her wings, Stryker shot up and snatched her around the waist, hauling them both to the deck.
Flat on his back with her sprawled atop his hard body, he grinned, much too pleased with himself for her liking. “Told you it gets rough,” he shouted over the rush of water. “I never lie to you, Angel Face.”
“That in itself is a lie,” she shot back, wedging her fingers in the gaps between the bone flooring and gripping tight while the chopping river tossed their ride. She could list thousands of his deceptions. Fine, they were revisiting his loathsome past behavior. “What about the time you stole the Ark of the Covenant? Or the Holy Chalice? The Vatican heist? Or when you took Joan’s sword and—”
“Aw, c’mon, she deserved it. She cut off the tip of my wing.”
“It regenerated, and you had no right to bother her in the first place when she was busy saving—
“Hey, I gave it back.”
“I made you give it back, demon.”
He laughed but the sound was lost in the great roar of the river. Its turmoil increased, waves thrashing over the bow as if their presence angered the river.
“Buckle up, baby.” Stryker held her tight to his chest. The boat bucked upward and bashed down, again and again. Freezing water sprayed everywhere, drenching them in seconds. Zara shuddered, chilled to the bone, half expecting ice to form on her frame.
Cheek to cheek, Stryker clutched her close with a hand cupping her head and one massive arm banded around her torso. “Hang on Angel Cake, I’ve got you.” Warmth slid into her quivering body, a soothing heat wafting from the demon. “Nice trick, right?” he murmured into her ear, lips grazing her skin.
Teeth chattering, she didn’t reply, too caught up in the sensation of his surprisingly soft lips on the shell of her ear, and his spicy scent, an intriguing blend of cardamom, cinnamon, and earthy, masculine musk.
Desire danced through her, followed fast by denial. No. Please, no. Eternal enemy. Archnemesis. He’s the bad guy. But her libido didn’t seem to care one bit about their battle-filled past, or even their more recent clashes. Her treacherous body relaxed against his, basking in the continued warmth emanating from him.
“Yes, baby. That’s it.” His hand slid to her nape, and he exhaled against the sensitive skin of her neck, setting off a flurry of butterflies in her stomach.
Trap. This had to be a trap, right? Nothing good could come of a tryst with a demon. It didn’t matter how loudly the hum chimed in her, or how wonderful his hard body felt under hers, they couldn’t possibly—
Oh, no, now his clever fingers kneaded the knots in her muscles, massaging the tension from her neck and shoulders, making her melt.
His warm lips brushed her ear once again. “Angel…”
She should stop him. Really, she should. Then he nuzzled the hollow of her shoulder, and his soft kisses eroded her superego’s usual iron will. […] Maybe, if she explored the cosmic hum trying to call them together instead of running from it, she would discover it meant nothing at all. Maybe, she could simply kiss him and move on.
She turned her head. He stilled, one hot palm planted between her shoulder blades, the other lounging on her lower back, his mouth so close their breath mingled. Goose bumps tracked over her and not from the cold since she had Stryker as her personal space heater.
Zara didn’t dare look into his eyes, instead digging deep one last time to stop this insanity, dredging up reasons this was a bad idea. Demon. D’uh. Longtime foe. Brash, blunt, devious, conniving, opinionated, manipulative, flirtatious, and yes, flirting was bad, so very, very ba—
[...] Lord help her, she wanted him too. Her gaze clashed with his. Such pretty eyes for a demon, like black onyx flecked with amber. He went statue-still beneath her, seemed to be holding his breath now, waiting for her to…
Make a move?
She wrapped a lock of his shoulder-length hair around her finger. Damp from the crashing river. Shiny, deepest black. Silky, and as warm as his body. She tugged on it.
A groan escaped him, and he kissed her.

Celia lives in California with her husband, daughter, and two feisty cats. She writes urban fantasy and paranormal romance, and has a particular fondness for werewolves, vampires, the Fae, and warrior-class angels. Her stories are action-packed and typically include one of the many varieties of romantic entanglements: fated mates, second chance, rescue romance, opposites attract, friends to lovers, enemies to lovers, and more.

When not writing, you’ll find Celia exercising, reading a good book, hanging with her family, or indulging her addiction to Joss Whedon’s TV shows and movies, as well as everything in the Marvel Universe franchise. 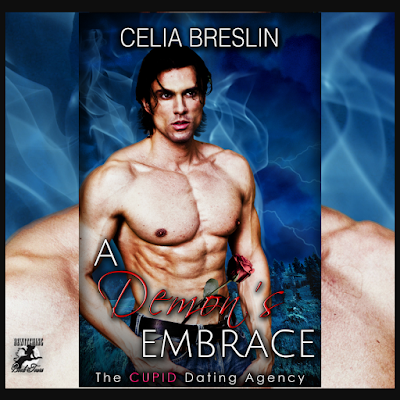