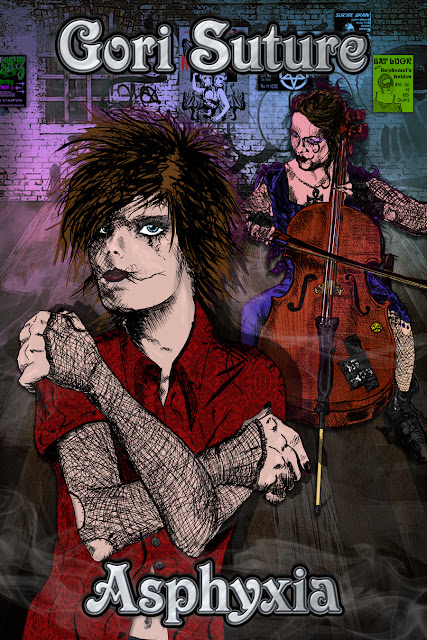 BLURB
Nathaniel, teenage occultist, is in love with Jithinia, a nihilistic sexpot.  All is well, until they meet Eldridge.  A shape-shifting creature from another dimension, he is quite mad.   He still feels the ghostly remnants of his amputated wings.  He can smell them rotting, feel the squirming maggots eating them.  The only thing that eases his suffering is devouring souls.  Cursed with this hunger, he knows that he is a monster, which only feeds his lunacy.  He is moments away from killing Nathaniel when he discovers something so astounding, he cannot continue.  As he falls in love with Nathaniel, he learns that true horror lies not in his monstrosity, but in his growing humanity.

Danielle was abducted and physically mutilated in the name of God for years. Her vile keeper, Preacher, tortures his broken dolls until they pray, to help them find God.  One day, Danielle does.  She reunites with her lost love Jithinia, whose world is now spinning out of control.

What follows is a magnum opus of magick and the true nature of God as the characters make their way through the sordid underbelly of modern Christian America.

Expand the mind, expand the soul!  The Paradox Chronicles are a series of metaphysical allegories which use extreme imagery and scenarios to jolt the psyche as a catalyst for spiritual growth.  Mind expansion doesn’t mean to simply elevate one’s thoughts in the highest direction; one must also debase one’s thoughts in the lowest direction.  Only then is the mind truly expanding in a balanced and veracious fashion.

This book series attempts to rouse people from their hypnotic waking sleep.

The Paradox Chronicles utilizes shock and horror juxtaposed with higher spiritual thinking to catapult the ego past its blockades, allowing for a deeper understanding of the veiled essence of divinity.  Asphyxia illustrates the power of perception and will, of enlightenment sought through debauchery, of awakening through titillation.

Amazon    BN      Lulu     Apple     Author Website
Excerpt:
A dreary dirge, thick like molasses, wept from a single organ as Jithinia gave her grandmother one last kiss goodbye.  She took a seat on the pew next to Nathaniel.  Despite the bitter cold outside, the funeral chapel felt like July in the Deep South.  She pulled a hand fan from the hymnbook rack and cooled herself.  On one side, there was a picture of white Jesus, and on the back, there was the twenty-third Psalm.  She read, “Yea, though I walk through the valley of the shadow of death, I will fear no evil:”
The hymn ended, and the pastor began his hollow bit — ashes to ashes and dust to dust, the bitch is dead; don’t make a fuss.
Jithinia heard the flapping of wings and a woeful coo.  She looked up and saw four doves trapped in the heating vent above her.  Two of them were dead; their stiff little feet hung down through the shit-caked metal grid.  She elbowed Nathaniel.  “Look up,” she whispered.
When he saw the birds, he remembered the dove from his dream, flailing its wings and screeching as its chest split open, and a feeling of foreboding washed over him.
The heat came on.  The birds squawked and hopped about.  The clicking of their feet sounded like Sammy Davis Jr. doing a tap dance.  Feathers rained down upon Jithinia and Nathaniel.  The hot air spilled over the carrions and filled the room with the rancid stench of decay.
Jithinia felt caged, too, like she could do so much more with her life, be anything, even fly, if the Fates would only release her from their trap.
Just then, the vent fell open.  The dead birds landed at Jithinia’s feet with a fleshy thud, and she felt dizzy and hollow as she began to hyperventilate.
The two live birds flew around the chapel in a panic.  The acoustics of the room caused the flapping of their wings to amplify and echo.  One dove flew to the skylight and began thrashing against the glass.  The other flew back and forth from the pulpit to the doors, finally lighting on a rafter above the pastor.
A thick, white glob fell from the bird’s ass, landed on the pastor’s right eye, and then slowly slid down his cheek.
Murmurs filled the room as everyone shuffled in their seats and looked at other things.  Jithinia’s mother turned a fan over and over in her hands.  Her uncle looked down at his watch.  Those with no other distractions scrutinized the hardwood floor.
The pastor paused his sermon.  He cleared his throat, wiped his eye with his sleeve, and began again as if nothing had happened.  However, he hadn’t gotten it all.  He had snow-white bird shit smeared across his face.  He looked like he’d been making out with a mime.
Jithinia didn’t mean to laugh aloud.  What began as a stifled giggle became an unreserved guffaw.  Everyone stared at her, but she couldn’t stop laughing.  She felt vacuous; her chest ached, and her limbs felt numb.  Her skin flushed red as she became enraged.  “What’s wrong with you people?”  she cried out.  “Can’t you see how funny this is?  Don’t sit there and pretend like none of this is happening!  This is hysterical!”
Loving arms wrapped around her.  “It’s okay.  It’s okay,” Nathaniel said.  “Calm down.  Come on.”  He led her outside.
She fell into his embrace and wept uncontrollably in his arms.  “What the fuck’s wrong with me?  I ruined my grandmother’s funeral.”
“No, the chapel ruined your grandmother’s funeral.  You just laughed at it.  No big deal.”
“I’m so embarrassed!”
“Why?  ‘Cause you had the balls to face what everyone else chose to ignore?  Fuck them!”
“You don’t understand!”
He pulled back from her and looked at her in disbelief.  “I don’t understand?  Come on, now.  Who are you talking to?”  He lit two cigarettes and handed one to her.
She took a deep drag.  “Let’s just go home.” 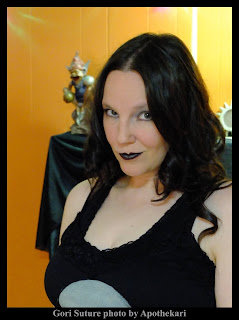 Author Info
Hailing from the outskirts of Mayberry, North Carolina, Gori Suture has been writing fiction since she could hold a crayon.  In addition to penning Grand Guignol style horror stories and audiobooks, she is also the creator of a hybrid genre of literature that melds metaphysical and visionary fiction with erotic horror for the purpose of spiritual advancement. Presented in a series of seven novels called The Paradox Chronicles (formerly The Smut Sagas), these books are allegorical, chronicling man’s pursuit of understanding God and the god within, juxtaposing eroticism and horror with metaphysical introspection for the sake of jarring the reader into an altered mental state.  Additionally, as an occult theorist, Gori Suture is the mother of modern Paradoxism, her interpretation of the mind-bending nature of God as Paradox, expounded upon on her blog The Color of Paradox (and soon to be in print), where she presents radical elucidations on color theory, Kabbalah, the dimensions, and the gods.  As an artist, Gori illustrates her own blogs, short stories, and audiobooks, and she co-creates the covers of her novels.  For fun, Gori enjoys tabletop role-playing, Arkham Horror board games, and video games.

The Book Junkie Reads . . . Interview with Gori Suture . . .
How would you describe your style of writing to someone that has never read your work?
My work is a mashup of dark fantasy, erotica, horror, and metaphysical and visionary fiction.  My style is influenced by Dennis Cooper, Poppy Z. Brite, and Caitlín R. Kiernan.  I definitely relate to societies’ outcasts.  I’d rather write a story that has a profound impact on a hundred people than one that entertains a million.  My style is very personal and raw.  I draw own my own life experiences, dreams, and musings.  I see ugly truths and vomit them out into a beautiful pattern.  Asphyxia is my first novel, and as such, the writing style in this book is somewhat immature, but I was careful not to change that when I cleaned it up for the re-release.  I’m not the same person now, and I didn’t want to accidently alter what young Gori was trying to say.

What are some of your writing/publishing goals for this year?
Over the next year, I plan to re-release the first five books in The Paradox Chronicles.  I will also be doing rewrites on book six, which I plan to release in 2021.

Do you feel that writing is an ingrained process or just something that flows naturally for you?
Writing is definitely ingrained into the core of my being.  As a little girl, I wrote stories, plays, poems, and even had my own pretend newspaper.   I get grumpy if I don’t get to write on a regular basis.  I think I may be addicted.

If you could spend one-week with 5 fictional character, who would they be?
John Constantine of Hellblazer
Willow Rosenberg from Buffy the Vampire Slayer
Don Juan Matus from the Carlos Castaneda books
Morpheus from Neil Gaiman’s comic The Sandman
Drizzt Do'Urden from the R. A. Salvatore books

Where would you spend one full year, if you could go ANYWhere? What would you do with this time?
I wouldn’t want to be away from home for a full year, but if I could go anywhere, I’d go back in time and cuddle my cat Lily again.

Can you share you next creative project(s)? If yes, can you give a few details?
My next creative project is A Taste of Void, book six in The Paradox Chronicles.  In this novel, Eldridge, Nathaniel, Jithinia, and Danielle face off against the god of evil, Iblis-Shaitan.  The allegory deals with the metaphysical aspects of ego death and transformation of self. 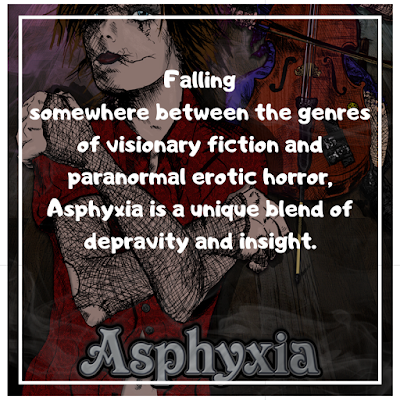