SPOTLIGHT w/INTERVIEW - When A Vamp Falls (War of Blood and Bonds, #1) by A.M. Griffin

When A Vamp Falls
War of Blood and Bonds, #1
by A.M. Griffin


Tagline: Ramsey will stop at nothing to keep Danya safe from harm—even go to war to protect the one he loves.

BLURB
Danya Evans’s normal everyday life is turned upside down when one good deed lands her on the opposite end of fangs. The fangs happen to be attached to the sexiest man she’s ever seen.

She knows that she should stay away from the vampire who almost kills her, but everything about Ramsey calls out to her heart and soul.

Ramsey Moreau, a Vampire who has walked Earth for thousands of years has two regrets. The first is underestimating the two new vampires who’ve found their way into New Orleans and the second is stealing blood from the trusting human he can't get off his mind. His world is mundane to say the least, but when Danya is around he finds a reason to live and love again.

He'll stop at nothing to keep her safe from harm—even go to war to protect the one he loves.

Excerpt
Death by sun meant fire, more pain, and more screaming. As far as Ramsey was concerned the whole ordeal would’ve been an overall drawn out affair.
But he was ready for it. He’d planned to greet the sun like a big boy.
Until his ego reared its ugly head.
There was no fucking way he would be taken out by two piddly fledglings. His self-preservation kicked into high gear.
He’d struggled, trying to get himself to safety. Wait out the impending sunrise in the shadows. But he couldn’t move. The blade they’d used had severed the tendons in his legs, and the force of the blows had crushed through his knees, just to name a few of the injuries.
In vain he’d tried to establish a telepathic link with Marcos, his assistant, but he couldn’t block out the pain and concentrate long enough to complete the thought. Without help he was good as dead. His only hope had been to use his dwindling energy to psychically call for help and pray that a passerby came to his rescue.
It had worked, and now because he’d turned his back on an enemy, he had to steal.
Ramsey didn’t want to take her blood without her permission, but with death at the front door and his ego urging him on, he had no other choice. The moment the woman had stepped into the alley he’d caught her scent. She smelled like the sweetest flower, rising above the stench of piss, feces, throw-up, and garbage. His instincts kicked in overdrive.
He needed her.

Her blood pumped hard and fast through her body. The sound weighed on his ears, his mind driving him to rise up and devour her. He struggled to move, unable to keep control.
He’d willed her closer.
She’d come with tentative steps.
Closer.
He’d stopped breathing. Her scent drove him insane. His body demanded the blood in order to survive.
Blood.
Mentally, he tried to lure her. He’d tried and tried, but couldn’t focus on the thought. Her blood was all he could think about. It consumed him.
“What happened to you?” she asked in a soft whisper.
Come closer. “Jumped. Stabbed. Dying.” He could barely speak. He’d wanted her so badly.
She stayed where she was. Red clouded his vision. Blood lust set in. He needed her. Now.
He’d tried to lunge, but his body wouldn’t cooperate. He whimpered in frustration, pain, and need.
Come closer.
“Do you have a cell phone? I have to call for help, but I left mine at the hotel.”
He didn’t have one. There’d never been a need. Everything he wanted to tell Marcos was done telepathically. He opened his mouth to tell her no, but changed his mind at the last second.
No. Then she’ll leave. “My … my back pocket.” He could barely talk anymore, his energy draining fast.

She’d rushed to him and kneeled at his side. The sound of her blood pounded in his head.
He couldn’t stop himself, and he breathed her scent in.
Delectable.
“Holy shit. This is all blood. You need an ambulance, mister.”
She pushed against him. Her hands roamed his butt, searching for a phone that wasn’t there. With all the strength he could muster he grabbed her, holding her in a vise-grip. She struggled against him, but even dying he had more strength than she did.
“Hey. Wh-what are you doing?”
“Sorry about this.”
He’d opened his mouth wide, his canines elongating in response. She looked on in horror, her screams caught in her throat as he descended on her neck. His teeth pierced her skin, and immediately the warm rush of blood filled his mouth.
She’d tasted better than he’d ever imagined. 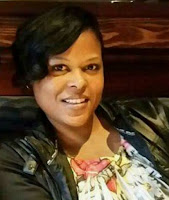 Author Info
A. M. Griffin is a wife who rarely cooks, mother of three, dog owner (and sometimes dog owned), a daughter, sister, aunt and friend. She's a hard worker whose two favorite outlets are reading and writing. She enjoys reading everything from mystery novels to historical romances and of course fantasy romance. She is a believer in the unbelievable, open to all possibilities from mermaids in our oceans and seas, angels in the skies and intelligent life forms in distant galaxies.

How would you describe your style of writing to someone that has never read your work? I have a few types. Some of my works are humorous (The Undercity Chronicles of Babylonia Jones, P.I.) . Most are adventurous (Dark Wolf Enterprises, When A Vamp Falls and Loving Dangerously). I like taking the reader on a trip. And some are dark (Dangerously Hers, Dangerously Theirs and Dangerously Forever). So just depends what the reader is looking for.

What are some of your writing/publishing goals for this year? I would love to get at least 4 books out this year. So far I have 2 planned. It’s been a struggle and I don’t know how successful I will be. But I have another War of Blood and Bonds book planned. Another Undercity Chronicles of Babylonia Jones, P.I. book that is currently in edits. A new Dark Wolf Enterprises book (wolf-shifter series). And the sci-fi book that I’ve been playing around with. Fingers crossed!

Do you feel that writing is an ingrained process or just something that flows naturally for you? Sometimes it flows naturally and the words seem to write themselves, and other times it’s like pulling teeth. When the words flow I’m on cloud nine and the world is great. But those times when I’m struggling its…hard. It’s depressing. But those moments of writing highs are well worth the lows.

Do you have a character that you have been working on for a long time that still isn't quite ready, but fills you with excitement to work on the story? I do! I wrote a sci-fi novel that’s been in the rough draft stage for about a year and a half now. The story is there, but during the second draft I always stop because I feel like I’ve missed something. One day I’ll finally get it right and release it, but until then it’s just a pet project living in my computer.

If you could spend one-week with 5 fictional characters, who would they be? Ohhhh. Nix from the Immortals After Dark series. I need to know how she sees the Ascension turning out. Also, I want to be with her when she meets her mate. I have an idea of who it will be, but I need to be there to witness it. Ash, from the Dark Hunters series. Well, because it’s Ash. Why else? Charlie Davidson (written by Darynda Jones). I think she would be a hoot to hang out with. Eva, from my Loving Dangerously series. She’s a new queen on an alien planet and she’s trying to save human kind. I need in on that. Plus the warriors on that planet are hunky and dominate. I’m so in. The last would be Celaena from the Throne of Glass series. She’s a bad-ass. Of course I would want her to train me in weapons and martial arts.

Where would you spend one full year, if you could go ANYWhere? What would you do with this time? Home. LOL. I love to travel and visiting different places, but I love coming home. I do want to go to Nigeria or South Africa and spend maybe 2-3 weeks there, but just the thought of being away from home that long gives me mini-panic attacks.

Can you share you next creative project(s)? If yes, can you give a few details? I’m currently writing the second book in the War of Blood and Bonds series. I have a working title but since it hasn’t been approved by the Publisher yet it’s got to stay secret. But the next book still follows Ramsey and Danya on their quest to stop Ramsey’s ex-wife Angelina and to find out what’s going on with Danya’s blood, but the love story is focused on Vallus and Bride, two of the characters we met in When A Vamp Falls.