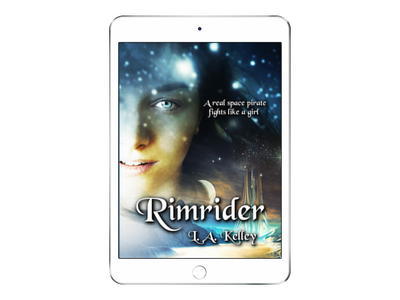 The Book Junkie Reads . . . Review of . . . RIMRIDER (Rimrider Adventures, #1) . . . My children loved listening to this book. Each afternoon after they grabbed a snack and got comfortable this was our daily read for an hour and half each day of one week.

We most certainly did not get any whiny, crybaby characters. We did get action, adventure, sweet little romance, and much sassy humor. We had fun listen then talking about it and what would happen next over dinner that evening.

I do recommend this read as a bounding between parents and children. We had fun and an adventure for five days straight. There was a bonding going with Will, Jane and even Mac. this was most certainly and YA Space Opera. There was the sense of adventure from the onset. Spaceships. Smugglers. Secrecy. Death. Sibling. Love.

Narrator Review of . . . . Rimrider (Rimrider Adventures, #1) . . . Our first encounter with Cassandra Richardson's work. We found her voice smooth and well suited for the characters of this read. It was pitched well and clear. The audio was clean and clear which may have lead to the few instances where we were having a little trouble determining which character was talking. At times some sounding almost the same, but after listening further you find out it was someone else.

The narration help to make it easier for younger children to get into the characters and the adventure.

I received this audiobook as part of my participation in a blog tour with Audiobookworm Promotions. The tour is being sponsored by L.A. Kelley. The gifting of this audiobook did not affect my opinion of it.

Awakened by her father, teenager Jane Benedict is ordered to memorize a mysterious code. Hours later, Mathias Benedict is dead and Jane and her brother, Will, are wards of United Earth Corporation. To evade the company's murderous clutches and uncover the meaning of her father's last message, Jane leads Will on a desperate escape across the galaxy aboard the Freetrader smuggler ship, Solar Vortex. Tangled in the crew's fight for freedom, Jane saves the life of young smuggler, Mac Sawyer, and learns her father's code identifies a secret cargo shipment. The trail leads to the planet Rimrock and the massive prison complex of Golgotha. Undercover as a spy, Jane stumbles into a conspiracy that can spell doom for the entire Freetrader cause and the extinction of an alien race. Can she escape the prison confines and deliver a warning before it's too late?

Piracy, intrigue, romance, space battles, and a daring rebellion from Earth wait on the galactic rim. Will Jane answer the call to adventure and find new purpose, or is death for high treason her fate?

What will you hear in this audiobook? No whiny, crybaby characters, only action, adventure, sweet romance, and a bit of sassy humor. It is suitable for kids through adult.

A. Kelley is from Florida and has been writing fantasy and science fiction adventure stories for all ages since she was old enough to chew on a number two pencil. All her books have adventure, humor, and a little romance because life is dull without them. She doesn’t write graphic sex or gore so your mama would approve, but does add a touch of cheeky sass so maybe she wouldn’t. In her spare time she calls in Bigfoot sightings to the Florida Department of Fish and Wildlife. They are heartily sick of hearing from her.
Author Links:

Cassandra Richardson is a multi-discipline artist specializing in Audiobooks, Musical Theatre, and Film. Her eclectic background has resulted in a varied and exciting career. You can see her on the stages of Southern California and in three indie features coming out in 2018. Her audiobooks are primarily Young Adult Fantasy / SciFi and The Rimrider Series is among her favorites! Who doesn't love the idea of being a space pirate? Giving voice to Jane and her band of fellow pirates has been a wonderfully creative experience.

Limited copies of the Rimrider audiobook are available for interested reviewers on the Adopt-An-Audiobook page!

Q&A with Author L.A. Kelley
Tell us about the process of turning your book into an audiobook.
I had no clue where to begin so decided to use ACX.com. ACX is the Audible production site and they have a large roster of narrators. Unfortunately, it’s not the easiest site to use. Basic information can be buried deep and difficult to find, especially for someone with no experience in audiobook production. The layout of the pages is awkward. Banging my head on the table and cursing at the screen helped. I soon ran out of English curse words and scrounged up a few in other languages. Thank you, Google Translator. (If you’re interested “You are a horse’s ass.” in Dutch is “Je bent een ezel van een paard.”) Once I was finally able to set up the account and the audition, the rest was easy. The best part was working with my narrator, Cassandra Richardson. She’s a total pro.

Do you believe certain types of writing translate better into audiobook format?
No. A nonfiction history can be as engaging as a space opera. It all depends on the quality of the writing and the narration. A audiobook is a collaborative process. If the writing is weak, a good narrator can’t make it better. If the narrator doesn’t suit the story, good writing won’t keep the listener from nodding off.

Was a possible audiobook recording something you were conscious of while writing?
An audiobook is a new idea for me, although when I write I “hear” dialog and “see” action like a movie in my head. Or maybe it’s a hallucination. I’m not sure.

How did you select your narrator?
I posted an audition script on ACX.com. They have a large roster of narrators and I lucked out with Cassandra Richardson. She’s terrific. Rimrider is the first book in a series with a large cast of characters; female and male, young and old, even aliens and a few sound effects. This isn’t a simple project and required a voice actor with a large range. I could tell by her audition she had the right stuff.

How closely did you work with your narrator before and during the recording process? Did you give them any pronunciation tips or special insight into the characters?
We had a great working relationship. I wrote an information sheet for Cass with specifics on the characters like age or important background information. I also added a pronunciation guide. She would send me a bunch of chapters at a time. I’d list any errors in pronunciation or areas where I wanted a change, along with the time code, and return them to her for a correction. There weren’t many. She ‘got’ the story from the beginning.

Were there any real life inspirations behind your writing?
Yup. I wanted to write a space opera and focus on a girl’s evolution from typical teenager to space pirate. While Rimrider is set in the future, the story’s roots are anchored firmly in the past, influenced by my first relative to come to America. She joined the flood of Eastern European immigrants who braved the trip across the Atlantic around 1900. Just shy of sixteen, she traveled alone with no knowledge of English or American customs and culture. She had no money, few skills, and carried nothing more than a beat-up suitcase held together with rope and a burning desire for a better life. As I thought about her, it struck me a girl crossing the ocean might have a lot in common with an interplanetary settler. Communication with people left behind is difficult. Trips are most likely one-way as expense or political unrest make a return to the homeland impossible. The scariest part for past and future travelers is the same; abandoning everything familiar and loved for the unknown. Only the most adventurous take the leap.With an idea of the heroine’s personality, I needed to flesh out the story and decided to make Rimrider a loose parallel of the American Revolution. On Earth, the colonists on the galactic rim are considered pirates and outlaws, plotting revolution against legal authority. Meanwhile, the Freetraders see themselves as fighting tyrants who make rules to only benefit Earth, ignore colonists’ rights, and treat them as cheap, exploitable labor. I especially wanted to add interesting female characters. For most of American history, women’s contributions were hidden or dismissed. They couldn’t vote or participate in politics or military campaigns. The girls and women in Rimrider are equal partners in the fight for freedom from the very beginning, and their voices are loud and clear.

How do you manage to avoid burn-out? What do you do to maintain your enthusiasm for writing?
I have burnout for house-cleaning, dental appointments, lawn maintenance, and shopping for a pair of jeans that fit. I’ve never had burnout for writing. What is that, anyway? Some kind of hot beverage?

What bits of advice would you give to aspiring authors?
When your manuscript is done, find someone who doesn’t love you or owe you money and ask for an honest critique. It’s okay if mama reads it, but remember she loves you and thinks everything you write is brilliant. She’ll never admit your manuscript baby is a big stinky pile of doo-doo.

What’s next for you?
I just released the first two books in a new series called Big Easy Shaman which I hope to eventually turn into audiobooks. The novels take place in an alternate history 1930s New Orleans where jazz and magic fill the air. Teenager Peter Whistler gets drawn into the life of a shaman; magic, mayhem, animals committing felonies, sass talk, gleeful revenge, bad things happening to good people for no particular reason, combat trained southern belles, zombie nuns, and the Mad Frog King of the Bayou. And that’s just the first two books. Book 1 is The Rules for Lying and Book 2 is The Book of the Practically Undead.