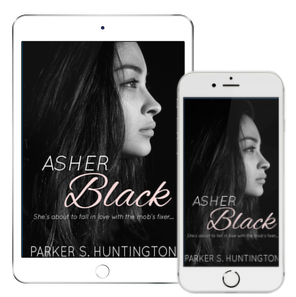 The Book Junkie Reads . . . Review of . . . ASHER BLACK (The Five Syndicate Series, #1) . . . Well, hot, sexy, funny, delicious does not do justice for the pair, Asher and Lucy. One sexy alpha male mafia enforcer paired with one scarred, newbie to the city, mafia, crime. I laughed a lot. Asher and Lucy were comical together but that did not detract from the mystery, suspense, drama and romance that surrounded them also.

The plot was not quite expected. The chemistry was a bit startling. I thought it would be fake and syrupy sweet.  The characters were refreshing, strong, tough, compatible. This was a different kind of mafia romance laced with suspense. I found that it was not a heavy on violence and murder. I liked that.

Narrator Review of . . . ASHER BLACK (The Five Syndicate Series, #1) . . . Lacy Laurel has most certainly done it again. She provides the twist only she can do. The performance was delightful. The clear clarity and smooth running audio was perfect from beginning to the end.

I received this audiobook as part of my participation in a blog tour with Audiobookworm Promotions. The tour is being sponsored by Lacy Laurel. The gifting of this audiobook did not affect my opinion of it.

He was supposed to kill me. I had done the unthinkable. I called the cops on him, on his family, but he let me live. We became friends, and then... we fell in love.

Lucy Ives is a foster kid, running from her turbulent past. On her first night in New York City, she accidentally calls the cops on the mafia. When their fixer comes to kill her, he spares her life in exchange for a favor--be his fake fiance or die.

Parker S. Huntington is from Orange County, California, USA. She has a B.A. in Creative Writing from the University of California, Riverside and is currently pursuing a Master's in Liberal Arts in Literature and Creative Writing from Harvard University. She has two puppies, Bauer and Chloe, and lives with her boyfriend of four years--a real life alpha male, book-boyfriend-worthy hunk of a man. She is currently working on Book 3 of the Five Syndicates Series.

Lacy lives the life of a full time wife, mother and household manager. Needing a temporary escape from time to time Lacy returned back to her first love - reading! After devouring everything she could get her hands on she thought, -what if she could mix her love of performance and literature in a professional capacity? Once getting involved in the world of book narration she quickly became hooked and when not with her family you can find her in her studio working hard to grow in her own storytelling abilities.
Website⎮Facebook⎮Twitter