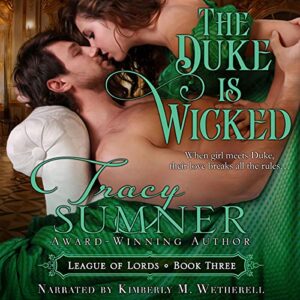 The Book Junkie Reads . . . Review of . . . THE DUKE IS WICKED (League of Lords, #3) . . . The Duke had met his future. This all happened with one chance encounter that almost cost him his life, but allows for his friends to see that this half of the terrible twins was something so much more.
The Duke of Ashcroft was a disappointment to his father but the third son was never meant to inherit the title. The American, Delaney, was looking for answers. She was wanting to find the truth. She knew where to look but how far was she willing to go to get the answers and the information. She was being pushed for more than just personal gain. Delaney and Sebastian had something smoldering between them and it was more than the flames that Sebastian could create with a thought or anger.
I found something fun and light yet relatable to the norm of historical romance that I liked a lot. I loved that extra element of paranormal/mystical/supernatural. The League was more than just a group of similar people. it was a brother and sisterhood. They were more family than comrades.  I also loved that there was more than just a passing glance at the previous couples. They were more involved in the story. You were able to really connect with the relationship between the couples, the extras and the league.
I have to say that I am excited at the possibility for Simon and Emma to have a story or at least more to come from them.
I am happy to say that I loved my trilogy introduction to Kimberly M. Wetherell's narration style. I loved her with the historical romance genre. She carried the genre very well with her tones, pitches, diction, and variation where needed.
I received this audiobook as part of my participation in a blog tour with Audiobookworm Promotions. The tour is being sponsored by Tracy Sumner. The gifting of this audiobook did not affect my opinion of it.

Victorian historical romance with a sexy splash of the supernatural.
Leagues and lives apart, Delaney and Sebastian navigate a world they're not destined for together. Can she let down her guard and learn to trust a WICKED Duke?
He's harboring a fiery secret...
The Duke of Ashcroft is determined to keep the League of Lords under wraps. After all, the group's supernatural gifts brought the mystical misfits together and nobody is going to tear them apart. Intelligent and wily, Sebastian knows better than to trust anyone—especially an impulsive and intrusive American woman.
She's looking for answers...
Competitive and confident, Delaney Temple is hellbent on uncovering the truth about the League. She'll stop at nothing to unearth the secrets they're burying. But when Sebastian is in trouble and Delaney comes to his rescue, their contempt turns to a burning desire. Suddenly, with their passion ignited, they can no longer deny their attraction.
A forbidden love..
Ready for the Duke of Ashcroft's story of forbidden love and intrigue? The Duke is Wicked is #3 in the steamy Victorian paranormal romance series Publishers Weekly calls, “A superpowered twist on Victorian romance!"

Award-winning author Tracy Sumner’s storytelling career began when she picked up a historical romance on a college beach trip, and she fondly blames LaVyrle Spencer for her obsession with the genre. She’s a recipient of the National Reader’s Choice, and her novels have been translated into Dutch, German, Portuguese and Spanish. She lived in New York, Paris and Taipei before finding her way back to the Lowcountry of South Carolina. When not writing sizzling love stories about feisty heroines and their temperamental-but-entirely-lovable heroes, Tracy enjoys reading, snowboarding, college football (Go Tigers!), yoga, and travel. She loves to hear from romance readers!

I’m Kimberly, an award-nominated SAG-AFTRA voiceover artist and director in Brooklyn, NY, specializing in audiobooks. When they let me, I do a little commercial VO and animation on the side. My voice is best described as a bright, warm mezzo, and my range effortlessly spans from plucky tween to snarky Millennial to my own belovedly blasé GenX. I’ve narrated for “Big Five” publishers Penguin Random House and Simon & Schuster, and I also direct audiobook productions for Macmillan and Penguin Random House. Additionally, I’ve narrated for Dreamscape Media, Tantor Audio, Deyan Audio, and OrangeSky Audio (among others), along with several independent authors through ACX and Findaway Voices. My 30-year career in the Arts has made me a certifiable polymath. I’m a classically-trained actor, an award-winning filmmaker, an accomplished international opera director and producer, a professional pastry chef, an NYC reading series host, and not for nothin’, I’m a pretty decent shuffleboard player. Above all, however, I’m a life-long book nerd and I can’t believe I’ve finally figured out how to read books for a living!