BOOK BLITZ w/EXCERPT - YA FANTASY - THE GROVE by Karri Thompson 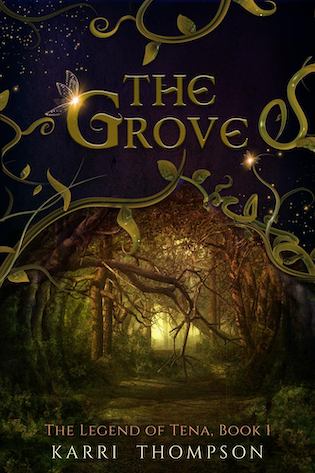 Entering the woods is forbidden. To go in can mean a fate worse than death. At least that’s what seventeen-year-old Laura has been told. But living in a new town with nothing to do, she ignores her mother’s dire warnings and explores the forest near her home.

The trees entice Laura deeper into the woods. A mysterious, soothing voice calls her name, and she becomes lost. When a young man finds her, she thinks she’s saved. But he insists their meeting is more than a coincidence. For centuries, his colony has been waiting for a savior. With his alluring eyes and gentle smile, Laura almost believes his crazy story.

Caught between worlds, and with her life at stake, she doesn’t know who to believe or trust. Her heart tells her one thing and her head another.

Is it her destiny, or will her fate only postpone the inevitable?

The hair on my arms rose. My heart thumped hard, the blood pulsing through my chest into my throat. Looking left and right, my muscles tensed to run or fight.

“Who’s there? What do you want?” I said at the same low whisper, my voice shaking.

A shimmering blur disappeared behind a tree—a featureless something, flashing in indistinguishable color as quickly as a silent whip.

“Laura,” someone said again, gentle and feather-light, drifting between the largest trees in front of me.

I held my breath.

“Laura.” My name resonated through the humid night air, echoing through the sugar maples before it thinned and died.

It was a male voice, full- bodied, but lacking malevolence and hostility. Strangely, it put me at ease. There must be a boy somewhere out here in the woods. I was sure of it. The voice sounded young, maybe my age of seventeen.

Or maybe it was a ghost. My Uncle Dean had told me the locals believed these woods were haunted. But ghosts couldn’t kill. At least that’s what I believed.

“Who are you?” I asked, relaxing my stiff muscles just enough to take a step forward. My shoulders dropped as I exhaled a pent-up breath. Broadening my stance, I leaned forward, raising the branch, and squeezed my eyes shut, hoping to hear it again.

“Laura,” it repeated. The word lingered through the dead of night, ringing softly in my ears. I opened my eyes.

“How do you know my name?” I asked, moving toward the direction of the voice. As a cool breeze rustled my pajama shorts, I wrapped one arm around myself.

A bird chirp rode the wind, followed by several more, weaving into a rhythm of tweets and trills. I looked up. Within the tousle of leaves and sway of thin limbs, perched a gathering of birds, flexing their wings for flight.

I took a step backwards, my eyes fixed on the canopy of leaves.

The bird calls increased, one squawk overlapping the other until their unique melody collapsed, twisting into an eerie song and wing beats.

“A–are you still there?” I breathed, eyeing the woods ahead of me and taking another step back.

A smear of color flashed to my left, and a cloud of leaves rose from the forest floor.

“Don’t go,” I said, breaking from a whisper.

The woods resonated with angry bird speak, their unnatural song thumping in my ears.

“I want to see you,” I shouted above the rising mad twitter.

A shadow skated across the ground at my feet. Wings flapped overhead, and a bird beak met my scalp with a hard peck. 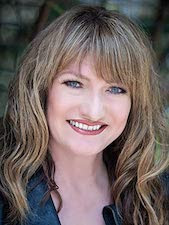 Karri Thompson, a native of San Diego, attended San Diego State University where she earned her bachelor’s degree in English and master’s degree in education. When she’s not writing novels and teaching high school English, she can be found nerding out at San Diego Comic-Con and cooking delicious meals for her family. Karri is the recipient of the San Diego Book Awards Best Published Young Adult Novel for 2014.