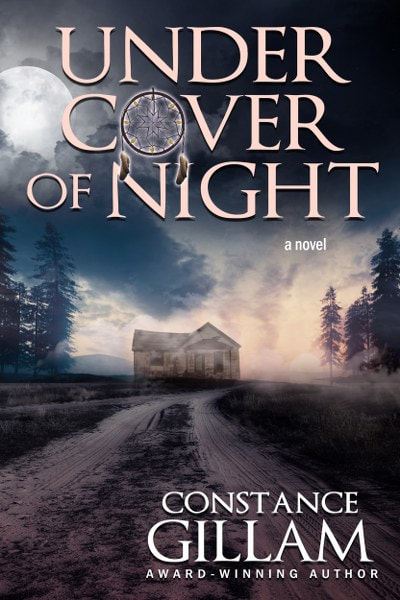 A courageous law officer fighting corruption. Can he hunt down an assassin on the reservation… or will he be permanently silenced?
Little River Reservation. Police Captain John Iron Hawk serves his people with pride. With a crucial election on the horizon, the strong and silent commander refuses to let criminals undermine his community’s leadership. But when his sister discovers his rival has been murdered, Iron Hawk is determined to catch the killer before he loses his job.
After his sibling quickly becomes the prime suspect, Iron Hawk is outraged when the FBI pulls him off the case. Working unofficially on the case, he uncovers conspiracies that reach far beyond the homicide. Protecting his homeland from ruthless enemies could cost this police chief his life.
Can Iron Hawk expose the deadly secrets before he’s buried in an unmarked grave?
Under Cover of Night is the third book in the thrilling Lakota romantic suspense series. If you like rich portrayals of Native American society, daring heroes, and edge-of-your-seat tension, then you’ll love Constance Gillam’s evocative tale.
Buy Under Cover of Night to unearth the mysteries of this reservation today!
Add to Goodreads
Amazon * Apple * B&N * Kobo
EXCERPT

Exhausted and cold, John crawled into bed. He’d never made it to headquarters.

He wrapped his arms around Zora and pulled her against his chest. The warmth of her body started to thaw his cold, tired one.

Outside, thunder boomed. John settled deeper into the comfort of her body.

He squeezed his eyes tight and pretended he didn’t hear it. But with his only deputy off the reservation, John was the on-call person.

“You going to get that?”

“No.” But he picked up the cell and flipped over onto his back. “Iron Hawk.”

The panic he heard in his sister’s voice shocked the drowsiness away. Lydia never panicked.

Beside him, Zora lifted her head. “What’s wrong?”

His sister’s strangled cries made the hairs on his arms rise and quiver. “Lydia, talk to me.” Was she having some delayed grief over her husband’s death?

The blood reference threw him off balance. “Whose blood?” He swung his legs out of bed and stared blindly around the room. His mind rushed and discarded possible scenarios—none of them good.

With his cell locked between his head and his shoulder, John crammed his legs into his discarded jeans.

Lamplight flooded the room. Zora scooted to the head of the bed, watching him with anxious brown eyes.

“Thomas who?” He pulled a shirt over his head.

John paused, his head half in and half out of his shirt. What the fuck? He eased the shirt down over his chest. What was his sister doing with Thomas Crow? “Where are you?”

“At his house.” The words came out almost on a moan—the moan of a wounded animal.

Why the hell was she at Crow’s house? John’s brain scrambled, trying to remember where the man lived. He’d purposely never delved too deeply into his political opponent’s personal life. “Give me the location.”

“Don’t touch anything. I’ll be there as soon as I can.” Outside, the rumble of thunder warned it would take longer than usual to get there.

“John?” Zora threw back the blanket and stood. “What’s wrong?” She rubbed her bare arms against the chill in the room.

The Book Junkie Reads . . . Review of . . . UNDER COVER OF NIGHT (Lakota, #3) . . . I just got started about 4am and I will tell you this I only stopped long enough to make sure that this posting was up and ready to go today...

I can say just from what I got through thus far. It is more intense than the first books of this series. We have more going on and someone behind the scenes on a mission to make sure the Iron Hawk is no longer an issue. And it will surprise you as to who and why. Stay tuned.... 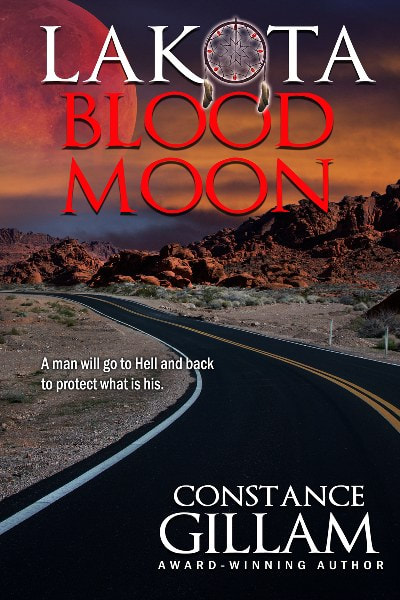 A MAN WILL GO TO HELL AND BACK TO PROTECT WHAT IS HIS.
Police Captain John Iron Hawk’s life is a speeding vehicle down a deserted road. A road with his tormented past looming at his back and a future summed up by the black thunder clouds building on the horizon.
His relationship with his daughter is nonexistent. And he can’t seem to say the words to the woman he loves to make her stay.
When Zora Hughes receives a job offer from Cosmopolitan magazine, she knows she has to take it and reestablish her career on the New York fashion scene. She has nothing to keep her on Little River Reservation, even if John is the only man she’s ever trusted or loved this completely. John’s life is his job, and he has little left over to build something with her.
But when a psychopathic killer turns their world upside down, they must dig deep to find the strength to outwit an adversary who will strip them of everything they hold dear…including each other.
This title is the second in the Lakota contemporary series.
Add to Goodreads
**Only. 99 cents until 4/15!!**
Amazon * Apple * B&N * Kobo
The Book Junkie Reads . . . Review of . . . LAKOTA BLOOD MOON (Lakota, #2) . . . Protecting those you love will turn your world upside down when you have someone that don't want the same outcome you do. Watching as John and Zora find their way through this mind field of ups and downs while they try to figure out their place in each others world.
Lakota Dreaming
Lakota, #1 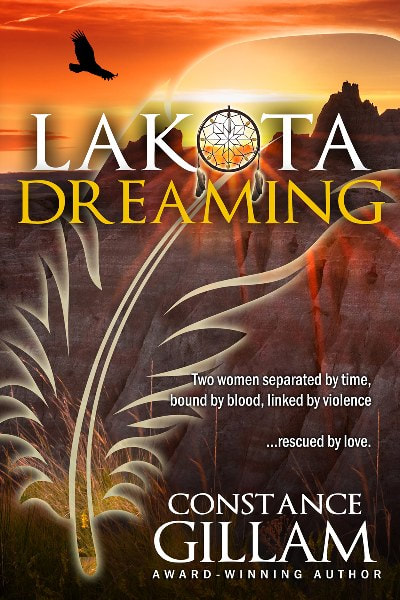 Her visions brought her here. Her heart tells her to stay. But someone dangerous wants her gone…
Zora Hughes is haunted by someone else’s past. Plagued by dreams of her ancestor fleeing captivity, the former NYC fashion editor travels to South Dakota to uncover the truth. And until she can put her visions to rest, she won’t let anyone stand in her way… not even the handsome captain of the local tribal police.
John Iron Hawk is on a mission to clean up his reservation. Trying to raise a teenage daughter on his own while working to expose a corrupt casino manager means he has little time for nonsense. But for reasons he can’t explain, he finds himself irresistibly drawn to the gorgeous New Yorker stirring up trouble.
As Zora’s search collides with John’s investigation, unearthing an old secret could have deadly consequences.
Threatened by a ruthless enemy, Zora and John may have to find a key to her past to unlock their new future...
Lakota Dreaming is the first book in the riveting Lakota series of romantic mysteries. If you like mystical connections, spiritual journeys, and lush depictions of Native American culture, then you’ll adore Constance Gillam’s entrancing novel.
Buy Lakota Dreaming to discover love where you least expect it today!
This is the first book in the contemporary Lakota series.
Add to Goodreads
Amazon * Apple * B&N * Kobo
The Book Junkie Reads . . . Review of . . . LAKOTA DREAMING (Lakota, #1) . . . The visions of the past collide with a present that could lead to death, destruction, love, forever, more...
Lakota Moon Rising
A Lakota Series Prequel 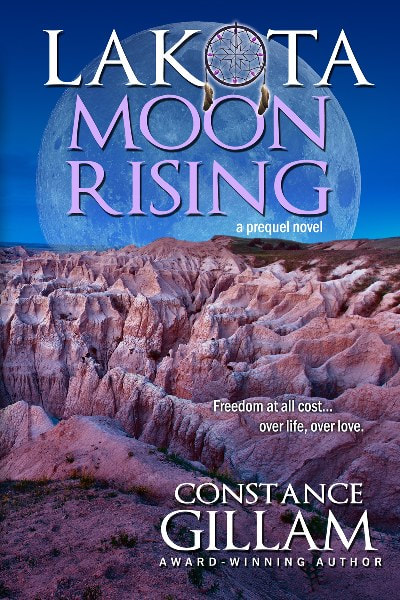 A Fight for Freedom. A Fight for Love
Julia, a mixed-race woman, born into slavery in Louisiana escapes brutal plantation life only to be captured by the Comanche. She holds tight to her dream of Canada and freedom as she unwillingly witnesses the acts of savagery the Indians perpetrate against the whites.
She is reluctantly drawn to a visiting Sioux warrior, Sunkawakan. The newcomer is both gentle and savage, compassionate and ruthless. Falling in love with him will mean an end to her dreams of freedom in the North.
In a vision, Sunkawakan Iyopeya saw white soldiers corral his people like cattle onto barren land. He visits the Cheyenne to convince them to band with him and his tribe, the Lakota Sioux, against the soldiers at Fort Laramie who would destroy the Indian way of life. While in the village, he meets beautiful but fiercely independent Julia. He is torn between his attraction to her and his duty to his people.
Torn between love and duty, pride and an intense need, they must both decide if this new love is worth the change in their destiny.
A different and intense historical romance. Read Lakota Moon Rising today.
This is a prequel to Lakota Dreaming and Lakota Blood Moon.
Add to Goodreads
Amazon * Apple * B&N * Kobo
The Book Junkie Reads . . . Review of . . . LAKOTA MOON RISING (Lakota prequel) . . . The beauty, magic, freedom, intensity, savagery, sensuality, reality of being other in America ...
For Lakota Moon Rising took my breath away. Two very different individual, both fighting for their way of life to continue without boundaries. The story of Julia and Sunkawakan is beautiful to me. It opens up the magic of love, magic of freedom, and the magic of life without boundaries. The story was told with clear intensity for the content in regards to the history of both sets of people. The savagery of the time and the reality of being of other race than white in America.
The story of Julia and Sunkawakan was heartbreaking and real. You could see it all unfold right before you. Constance laid a compelling visual before me with the words she placed on the pages. This history was entwined with the romance of two very different people looking to make life something more.
I was first given this story some time ago by a friend. I found the opportunity to read it and was very satisfied with it from multiple aspects.

Constance Gillam grew up in the Midwest among ice and snow. She now lives in the sunny South and loves it. As a child, she was a precocious reader and would sneak into the adult fiction section of the library. At age eleven she read Gone with the Wind and never looked back.
Romance is her love, and she fills her books with mystery and suspense, conflict and emotion.
Website * Facebook * Twitter * Instagram * Bookbub * Amazon * Goodreads