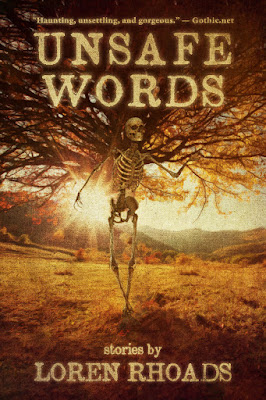 Tagline: Once you’ve done the most unforgivable thing, what will you do next?

In the first full-length collection of her edgy, award-winning short stories, Loren Rhoads punctures the boundaries between horror, dark fantasy, and science fiction in a maelstrom of sex, drugs, and rock-n-roll.

Ghosts, succubi, naiads, vampires, the Wild Hunt, and the worst predator in the woods stalk these pages, alongside human monsters who follow their cravings past sanity or sense.

Something brushed her leg. Violet kept treading water, legs pedaling below her, but wondered: did the pool have leeches in it? Snapping turtles? Her thoughts darted into paranoia: were there sharks? Piranhas? Anything that might bite?

Not that it mattered. She would stay in this water and be gummed to death by goldfish rather than get out and take her chances with the mountain lion watching her from the side of the pool.

Whatever it was below her tangled in her toes. It felt for all the world like hair. Violet shuddered, losing her rhythm momentarily, but then forced her legs to scissor once more.

She peered down into the murky water. Something below her glowed an icy white color, like moonlight. Like the moon had fallen into the old swimming pool. The temperature of the water around her plummeted. A cramp knotted her left calf. Violet whimpered.

Her head dipped toward the surface of the water. Violet fought to calm herself, to hold herself up by the determined stroking of her arms. She tried to stretch the charley horse from her muscle.

Something very much like a hand touched her thigh.

She shrieked. The sound echoed from the hills surrounding the pool and repeated from the mountain peak on the other side of the valley.

The mountain lion narrowed her eyes and stared at Violet.

Then a girl’s voice said in her ear: “Don’t be afraid.”

Ice flooded her veins and Violet lost the ability to control her limbs. Her head slipped under the surface of the water and she took a breath…and something caught her in its arms and lifted her, coughing, back to the surface. And held her there, safely, until she could breathe again.

Violet’s heart fluttered in her chest, struggling to regain its rhythm. She could see arms around her ribs, holding her up in the water. They were a pale grayish white. Not a natural color. She wondered if it was possible to die of fear.

“I’m afraid to look at you,” Violet whispered. She didn’t trust her own voice, didn’t want to hear the sound of her own terror.

“I’m not horrible,” the ghost promised.

“Did you drown here?”

Violet swallowed hard. Her throat was sore from the water she’d inhaled. She coughed once more, but it didn’t really help. Tentatively, she started to dog paddle.

The ghost released her. Violet turned slowly, to find a girl her own age bobbing alongside her. Her long, long hair was blond, where Violet’s was dark. It was slicked to her skull and green with streaks of pondweed. Her eyes were pale blue, maybe, or green, where Violet’s were brown. The drowned girl wasn’t horrible, even if her skin had gone the color of something kept from sunlight for a long, long time.

“Are you alone here?” Violet asked. The quaver in her voice unnerved her even more, if that were possible. She swallowed again and tried to concentrate on her kicking.

“My boyfriend is here, too,” the ghost said. “He doesn’t like to talk to people.”

“Did you die together?”

“We thought it would be romantic,” the ghost said. “We didn’t realize we’d be trapped here. That’s why I don’t want you to die. You will be trapped here, too.”

“Why are you trapped?”

“A creature roams these woods. A monster. It is hungry for company. It collects us.”

“How many of you are there?” Violet asked, even though she didn’t want to know the answer.

“I don’t want to be trapped here,” Violet said, “but I don’t know how to get past the mountain lion.”

“There is no mountain lion,” the ghost said. “That’s the monster. It takes many forms.”

Loren Rhoads is the author of the In the Wake of the Templars space opera trilogy, co-author of a succubus/angel duology called As Above, So Below, and editor of Tales for the Camp Fire: An Anthology Benefiting Wildfire Relief. She's also the author of a nonfiction travel guide called 199 Cemeteries to See Before You Die. Unsafe Words is the first full-length collection of her short stories.

1) How would you describe your style of writing to someone that has never read your work?

2) What mindset or routine do you feel the need to set when preparing to write (in general whether you are working on a project or just free writing)?

LR: During the pandemic, I've made a lot of online writing dates. One of them is set up by a local writing teacher, someone I know from Facebook. A bunch of her students and friends meet up on Zoom on Monday mornings to write. It's weird, when you stop and think about it: everyone sitting in their own homes writing, with the camera on their computers spying on them. Even so, I find it really helps me to settle down to work when I know other writers are working, too. (Thanks for setting this up, Jenny!)

I've set up my own writing date with a friend, one on one, also over Zoom. That's fun because we chat a little bit about our work, then settle in. It's almost like meeting up for a writing date at a cafe.

I've also been dropping into Shut Up and Write sessions here and there. I used to attend a couple of groups in San Francisco, back when we could meet in cafes. The online groups are fun because people come from around the world. There's always a huge variety of projects being worked on at any given time.

3) Have you found yourself bonding with any particular character(s)? If so which one(s)?

LR: One of the stories in Unsafe Words is about the adventures of a succubus named Lorelei in the music industry in LA in the 1970s. "Never Bargained for You" is a prequel of sorts to my novels Lost Angels and Angelus Rose, about Lorelei and her boyfriend, the angel Azaziel.

I love writing for Lorelei because she's surprisingly compassionate. Since she is so much older than any of the humans she meets, she can see through their worries and concerns. Writing about her seducing people is really fun.

LR: I'm looking forward to Nanowrimo because I'm finally going to finish the first novel I ever tried to write. The Death of Memory is about a young witch reclaiming her power. She meets a vampire and explores San Francisco: so much fun stuff to write about.

I've been writing a series of stories about the witch, whose name is Alondra DeCourval. They've been published in Best New Horror, Weirdbook, Occult Detective Quarterly, and other places.

One of the first of Alondra's stories is reprinted in Unsafe Words. "Valentine" is about Alondra trying to steal an immortal's heart to keep her guardian alive. It's definitely on the horror side of dark fantasy.

5) Where would you spend one full year, if you could go ANYWhere, money is not a concern? What would you do with this time?

LR: I would love to spend a year in London. Mostly, I would write, but I'd love to see all the museums and learn my way around the city. It would be wonderful to take weekend trips to explore England, Wales, and Scotland. I want to visit the old country churchyards and the standing stones and get the feel for living somewhere outside the US. I might not ever come home. 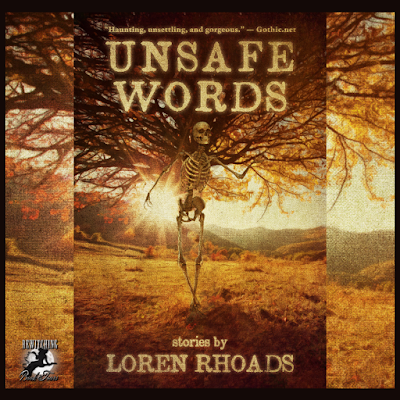