THE KILLER IN THE WOODS
A Robert Vance Novel, #1
by Rick Van Etten 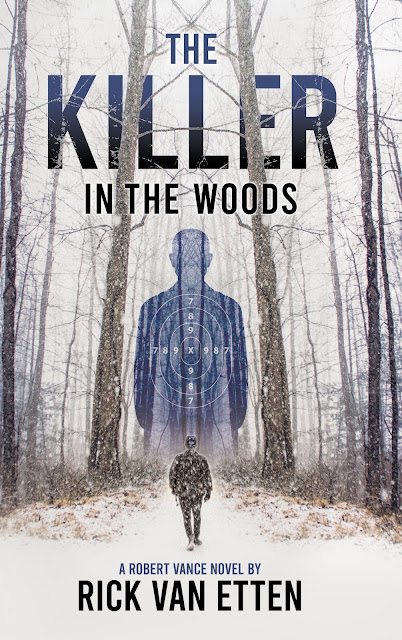 BLURB
ROBERT VANCE IS A MAN WITH A SECRET…

Robert Vance is a magazine editor who works from home and lives in a house full of books. His neighbors think of him as a quiet, unassuming man. His passion for pheasant hunting with Preacher, his German wirehaired pointer, is typical of sportsmen living in the Midwest. But what isn’t so typical—and what his neighbors don’t know—is that occasionally Robert hunts something besides pheasants.

Robert hates bullies and injustice. When someone has a problem with either, he or she can hire Robert to make the situation right.

But Robert isn’t—in his own mind—just a contract killer. He lives by a set of rules that dictate who, where, and why he can kill. So when a well-meaning citizen discovers Robert’s latest target and winds up being charged with the killing, Robert must take steps to ensure the man’s freedom.

STEPS THAT WILL MOST LIKELY INVOLVE KILLING AGAIN…
Amazon

Excerpt
The money is good, but that’s not why I do it.
Kill people, I mean. That’s what I do, and I’m very good at it. And yes, the compensation is usually more than adequate.
But don’t start jumping to conclusions. I’m not a spook. I’m not some ex-Agency, ultra-ultra-deep-cover, government-trained assassin who got my start in the military and, having discovered a unique talent, couldn’t let it go. Nor was I ever encouraged by my “Uncle” to put my special skills to use for the common good, in which capacity I might still have the occasional brush-up with colleagues who might or might not be among the so-called good guys and might or might not be people I should trust.
No. I don’t play at espionage. I don’t call secret phone numbers and get my orders from people who use lots of acronyms and won’t allow their names to be spoken aloud on an open line, and I don’t have hidden files tucked away somewhere that I can use as leverage if I find myself running afoul of a power player. I never served in the military, and the extent of my contact with the government consists of filing my income taxes every year, renewing the registration on my SUV and voting in the occasional election. The few times I’ve been called for jury duty I’ve managed to get myself excused.
Sounds pretty dull, doesn’t it? You’re right; it is. And that’s by design.
If you saw me on the street or in a restaurant or a shopping mall or an airport—and there’s a reasonable chance you have seen me in some of those places—you’d most likely give me no more than a passing glance. There’s quite a bit about me that’s just plain average—size, looks, clothing. I wear glasses, and my hair is getting thin on top.
I dress comfortably and rather conservatively. I recently became eligible for Social Security—I’m old enough to have served in Vietnam, but I was in college at the time and my number in the draft lottery was high enough to keep me there.
I don’t go out of my way to attract attention, but neither do I live an introverted, reclusive life. I’m not married, but I date casually, and I occasionally get invited to parties and cookouts and can hold my own in a conversation on a variety of subjects. People usually laugh at my jokes, and I keep myself reasonably well informed about most current events. I read extensively, and my house is full of books.
I also have a Browning gun vault full of shotguns, but those are primarily related to my regular job—I’m the editor of an outdoor sporting magazine, a “hook and bullet rag,” as such publications are irreverently referred to within the publishing industry. I’m a bird hunter by avocation, and a six-year-old German wirehaired pointer named Preacher—for Clint Eastwood’s grizzled character in the movie Pale Rider—shares my home.
Sometimes I use one of my shotguns for something besides upland game or waterfowl. That’s a safe enough practice, as I’ll explain later. When a shotgun is too large for the job at hand—when it’s necessary to get up close and personal to the target, in other words—I’ll occasionally use a handgun. But I never keep these after the job is finished. That’s Rule Number 3.
I travel a good bit for my job—I get quite a few invitations from advertisers throughout the hunting season, and by taking advantage of these invitations I’ve hunted in many locations and at many top-drawer facilities around the world. Sometimes—not frequently, but once in a while—my two jobs overlap. The advertiser picks up the tab for my hunt (in exchange for some editorial ink), and by staying an extra day or two—usually on the pretext of visiting an old childhood friend or a seldom-seen relative and always at my own expense—I manage to take care of the other assignment while I’m at it. It doesn’t happen that way very often, but it’s convenient when it does.
OK, so if I really don’t do it for the money, why do I do it?
Simple.
There are two things I can’t abide in this world—a bully, and injustice.
The two often go hand in hand, and when I encounter either, I bristle. When someone else has a problem with either, he or she will sometimes seek me out to make the situation right.
Over the years, I’ve become very good at this. And that’s my real motivation—the feeling of satisfaction that comes from having done a job well, righted a wrong, balanced the scales or eliminated an oppressive threat.
It’s my way of leaving the world a little better place than I found it.

How would you describe your style of writing to someone that has never read your work? I’d call it conversational. Several lifetimes ago when I was teaching composition to college freshmen, I encouraged them to write in their own voice, not to write—or attempt to write—in the manner they thought an English instructor wanted to see. In other words, steer clear of stilted, stuffy language and instead, put themselves on the page…in simplest terms, be authentic.
An interviewer once asked Robert B. Parker, author of the famed Spenser series of private eye novels, why readers liked his books. Without hesitating, Parker replied that he thought readers liked his books because of the way the words sound. I’ve always remembered that, and that’s an objective I strive for in my own writing. I want readers to like the sound of what they read—conversational, comfortable, enjoyable.

What mindset or routine do you feel the need to set when preparing to write (in general whether you are working on a project or just free writing)? It’s tempting to cop out here and just describe what I don’t do when I’m preparing to write—for example, I don’t work from an outline, or spend much time in advance thinking out all the details of a plot. I start with a general idea and just plunge in. The exercise of writing is very often itself a process of discovery, and sometimes I’m surprised by where the story takes me.
I do have some routines that almost never vary, however. I’m an early riser, and I start each day with coffee and a half hour or 45 minutes of “free reading,” usually the latest novel by one of my favorite authors. After that I take my Irish setter, Mattie, for a long ramble at a nearby lake. We usually stay out for at least an hour, and it’s an excellent head-clearing exercise for me. When we return home, I get Mattie squared away then sit down at the computer. I start by re-reading what I wrote the previous day, make any tweaks that are necessary, and that serves as a warm-up to start cranking on new material.

Have you found yourself bonding with any particular character(s)? If so which one(s)? I certainly found myself relating to Robert Vance, the protagonist in The Killer in the Woods. Several early readers asked how much of what I wrote was autobiographical, and I can’t deny that I incorporated several elements from my life—Vance’s day job as the editor of an outdoor magazine and his enthusiasm for pheasant hunting, for example. The oft-repeated advice to “write what you know” definitely came into play here.
But of course, the hit man stuff is pure fiction. Back in the 1960s and ‘70s—I realize I’m seriously dating myself—the anti-hero was a very popular character in fiction and in film, and I wanted to see if I could re-introduce that character in a contemporary setting. I was especially intrigued by the paradox of Vance’s character—he’s an idealistic sportsman on one hand, while on the other he’s a rather ruthless vigilante.

Can you share your next creative project(s)? If yes, can you give a few details? My next project is the second book in the Robert Vance series, tentatively titled The Killer in the Cul-de-sac. Several friends and family members who read The Killer in the Woods in draft form said they couldn’t wait for the next book in the series—I hope that doesn’t sound boastful, because I was truly humbled by their praise. But it also left me feeling a sense of obligation to continue to deliver, so yeah, now I’m committed.
What are some of your writing/publishing goals for this year? To finish the second Robert Vance novel and get it into print asap, but not by sacrificing quality in doing so. It’s often said that the second novel is harder to write than the first, and I’m finding that to be true. I tend to set a pretty high bar for myself, and I don’t want to disappoint readers of the first book.