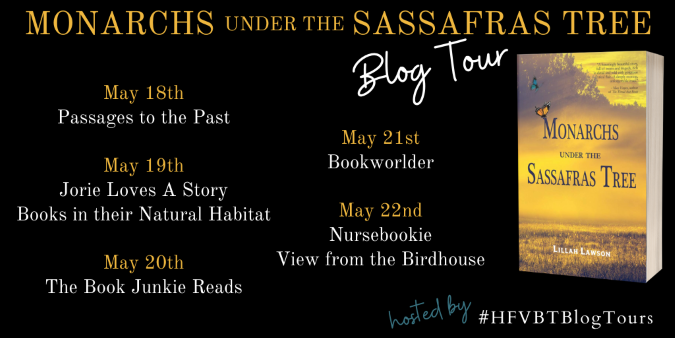 BLURB
It's an unusually warm autumn, 1929, and O.T. Lawrence is about as content as a cotton farmer can be in Five Forks, Georgia. Nothing—not poverty, drought, or even the boll weevi—can spoil the idyllic life he shares with his doting wife and children and his beloved twin brother Walt. Until illness and Black Tuesday take everything O.T. ever held dear in one fell swoop. Grieving, drinking, and careening toward homelessness, O.T. is on the brink of ending it all when he receives an odd letter from a teenage acquaintance, the enigmatic Sivvy Hargrove, who is locked away in Milledgeville’s asylum for the insane. Traveling through desperate antebellum towns, O.T. and his daughter Ginny are determined to find Sivvy and discover her story. Set against the backdrop of the Great Depression, Monarchs Under the Sassafras Tree is a love story to Georgia and the spirit of its people—a story of family, unconditional love, poverty, injustice, and finding the strength inside to keep on going when all is lost.

“Lillah Lawson spins a yarn that’s wonderful in its knottiness. Monarchs Under the Sassafras Tree is a historical Southern fable about butterflies, biscuits and the healing power of family, both biological and chosen. The images are evocative, the dialogue rough and realistic, the emotions achingly real. A must-read.” —Lauren Emily Whalen, author of Satellite

"A hauntingly beautiful story, full of twists and tragedy, rich in detail and told with gorgeous lyrical flair… A deeply moving, unforgettable read.” —Alice Hayes, author of The Thread that Binds

“An exquisite read, with the tender yet gritty undertones of Steinback, Monarchs Under the Sassafras Tree is a solemn walk through the deep south during one of the most difficult eras in American history: the early twentieth century. Lawson captures the southern gothic through the often fragile, yet always hopeful hearts of her characters as they try to cope with the hard knocks of life. This book will touch your heart in the beautifully tragic way that only southern gothic can, slowly at first, and then all at once.” —Melanie Cossey, author of A Peculiar Curiosity

Author Into
Lillah Lawson has been writing since she was 8 years old, when she won a short story contest at her elementary school. The story was about a Princess who gets tired of waiting for the Prince to show up and saves herself. Once she saw her words printed in the local newspaper, she knew she wanted to be a writer.

Having written professionally as well as dabbling in poetry, children's books and blogging, Lillah finally completed her first novel, Aroha, as part of a NaNoWriMo challenge in 2012.
She lives in Georgia, in the United States, with her partner and son and three rambunctious animals. She is currently working on another novel.

During the Blog Tour, we are giving away a paperback copy of Monarchs Under the Sassafras Tree! To enter, please use the Gleam form below.


Giveaway Rules – Giveaway ends at 11:59 pm EST on May 22nd. You must be 18 or older to enter. – Paperback giveaway is open to the US only. – Only one entry per household. – All giveaway entrants agree to be honest and not cheat the systems; any suspicion of fraud will be decided upon by blog/site owner and the sponsor, and entrants may be disqualified at our discretion. – The winner has 48 hours to claim prize or a new winner is chosen.