SPOTLIGHT - FANTASY - Cursed By Furies: A Tale of Vikings, Elves, and Gods (The Cursed Elves, #1) by Diedra Drake

Cursed By Furies:
A Tale of Vikings, Elves, and Gods
The Cursed Elves, #1 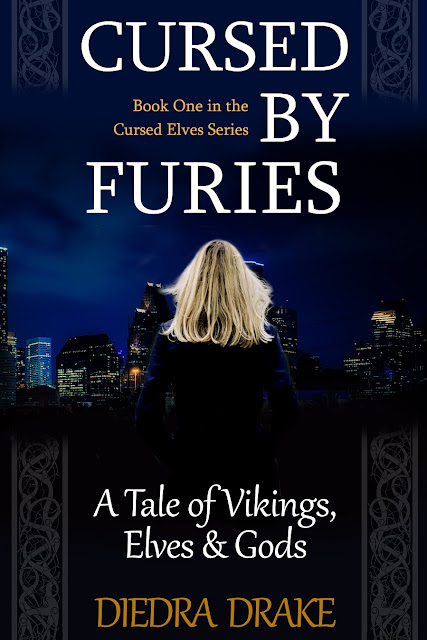 Tagline: What if the myths were all real?

BLURB
1000 years ago the Elves nearly destroyed their species through war. As punishment, their ancestors cursed them and trapped them on the Earthly plane.

Priscilla Forester is a 500-year-old Cursed Elf, with abilities far different from most. She knows there is some secret about her origins, but has given up thinking she will ever discover the truth.

However, Fate was only waiting for the right moment to reveal its secrets. As Priscilla and her lovers battle against warring Elf Houses, her true nature begins to emerge, and it is more than anyone had bargained for.

EXCERPT
Mitchell parked in the lot, careful to stay out of the immediate line of sight while Raymond filled up his tank.
He replaced the pump nozzle before entering the store to get his chips and pay for the gas. Another car pulled up, and the driver also went inside. A few more minutes passed, and Mitchell started to grow concerned.
Raymond didn’t normally dawdle, and there weren’t so many cars around that there should be a big line. Maybe the clerk was having problems with his register or…
A shot rang out. Then another.
Mitchell’s heart sank and fear surged through him as he nearly tore the door off getting out of the car. He was inside the store in a blink and took stock of the situation in seconds. Raymond lay on the floor bleeding from his side, the red pool growing quickly. The clerk's body hung slumped over the register counter, blood pouring out from his chest.
The shooter’s eyes darted back and forth between the two victims, his breathing chaotic as he rubbed his fingers through his hair and pressed his palms to his temples. His eyes wide as he stared at the bodies and the blood. He didn't immediately realize anyone else was standing there. When he finally noticed Mitchell, it was but a moment before the shooter’s neck was broken and he collapsed next to where his gun had fallen.
Mitchell dashed to the automotive aisle and returned with a pack of terry cloth rags and duct tape. He ripped open Raymond’s shirt, tore one of the cotton rags out of the bundle, and started mercilessly packing the wound. Raymond screamed in agony for a few seconds, then his body became limp as he lost consciousness.
“Sorry Ray, it’s better this way," Mitchell mumbled as an apology.
He put his fingers underneath the bleeding side of Raymond’s body and felt around looking for an exit wound. Sure enough, the bullet had gone entirely through. With one hand Mitchell shifted Raymond onto his side, then shoved another piece of rag into the exit wound. When he rolled him back over, he noticed the fabric on the front was completely saturated and blood was pouring out of the injury again.
“Dammit. Something’s bleeding inside." He took a shaky breath. “Shit!”
He wiped off as much blood as he could to dry the skin, folded a piece of cloth like a bandage, and duct taped it over the opening in his flesh. He repeated the process on the back.
Mitchell looked around and realized he needed to lock down the scene. He stood and flipped the sign on the front entrance to 'Closed,' then hit the nearby light switches so the interior went dark.
He returned to Raymond, lifted him effortlessly, and carefully carried him outside to where he’d left his vehicle in the parking lot. He managed to open the passenger door and put him in the seat, then reclined it back to keep his body at an angle. As he was about to close him in, he noted the seat belt. With a last-minute idea, Mitchell ripped it from the wall of the car and started sliding it under Raymond.
Raymond regained consciousness for a moment, took one look at Mitchell, and began yelling in terror while pulling away.

Mitchell sighed as he realized his fangs had been out because of all the blood and stress. Another mistake. His superiors were going to kill him. He tightened the belt over the wound like a tourniquet, and the sudden pain made Raymond pass out again.

Author Info
Diedra Drake is a life-long student of mythology and history, with a particular interest in the ways that different cultures tell the same stories using name variations. She is competent in classical Latin, and enjoys reading the classics – particularly Homer, Plutarch, and Shakespeare. For relaxation, Diedra loves to crack open a new historical romance novel or binge a new series on streaming. After a couple of decades being a business owner in the technology industry, she decided to explore her other interests through the creation of a mythic fantasy romance world. She lives in Central Texas with her family, which includes a small cat colony and a couple of dogs, and tries to ensure she gets a daily serving of ice cream for continual inspiration.

How would you describe your style of writing to someone that has never read your work?
My writing is very character and dialogue driven. The growth and development of the characters, keeping true to their personality, are both extremely important to me. I don’t feed the reader everything all at once. A reader may be going along and something gets mentioned that they have never heard of, and if I don’t explain it there, don’t worry… I will, but I want to wait for a moment when it’s natural to mention it. If the characters wouldn’t explain it to each other, they’re not going to find out either until a point where it makes sense for someone to talk about it.
This applies similarly with characters as a whole. There are a lot of characters, but you don’t have to worry about remembering all the names all at once. If a character is important, you’re likely to see them repeat in the story and you’ll remember their names --- or if it has been a long time, I’ll remind the reader in a different way.
I like to slowly reveal more and more about each of the characters, and the world as a whole, so that the reader better understands them over time. My overall style is much more like watching a movie versus being inside a characters head, and I trust the dialogue and actions to convey nearly everything relevant in the story.

What are some of your writing/publishing goals for this year?
I’d love to see the ‘Cursed by Furies’ launch take off without any major problems. I’m also working on a book that is technically between books 1 & 2, and if I can wrap it up by September my publisher will bump book 2 for me. Regardless, I’d like to see either book 2 or book 1.5 get launched successfully by Christmas. It would be nice if I can see the ARCs for book 3 go out in December, but I’m not going to be terribly upset if that runs a bit later. I’d like to also see one of the large print versions of ‘Cursed by Furies’ come out before Christmas.

Do you have a character that you have been working on for a long time that still isn't quite ready, but fills you with excitement to work on the story?
No, but I do have an idea for some children’s versions of mythology, but I haven’t figured out how I would approach some of the ‘issues’ that are not questions parents would be happy with me putting in their kids heads. For instance, it’s pretty well known by adults that the Greco-Roman Gods were incestuous, and I’m not entirely certain how to tell the story in a way that doesn’t involve that part --- especially if the kids are paying attention to the names in the origin stories.

If you could spend one-week with 5 fictional character, who would they be?
Is it strange to say that I’d want to spend time with the ones I’ve created? I feel like it would give me an opportunity to see them interact independently of my mental processing filter and would make it possible to write them even better. Plus, I could ask them if they agree with how I’ve written them!

Where would you spend one full year, if you could go ANYWhere? What would you do with this time?
Well, I’m a mythology junkie, so I would definitely want to spend that time visiting places important to the myths I love so dearly. I’d probably take 80% of that year and divide it up between Greece, Italy, and Britain. Then the remaining 20% I’d use to visit Egypt and India.

Can you share you next creative project(s)? If yes, can you give a few details?
Absolutely. I briefly mentioned books 1.5, 2, and 3 earlier, but let me tell you a bit more about those.
I don’t want to give away the name of 1.5 because it could be a bit of a spoiler for book 1 as it is right now, the name may need to change. But basically it takes place in the two-year gap between book 1 and 2. Largely it deals with the way so many of their lives have changed after the events of book 1, and how they’re all dealing with the major adjustments. Some are coping with things better than others.
Book 2 is called ‘Well Deserved Wrath,’ and is centered on the arrival of an old nemesis who shows up and begins creating havoc. Two years after Priscilla first started learning she had more powers, this book shows her as she’s been learning to embrace them and obtain new abilities. Wrath introduces another God into the story, and it’s a pretty dark and violent book.
Book 3 is called ‘Memory of Betrayal,’ and that book in the series picks up not too long after book 2. In book 3, Priscilla finds herself locked up with a new God, and works to convince him to keep her identity a secret. Meanwhile attacks are launched against her family and friends, and they have to figure out who is behind it all, but are discovering that it’s possible it could be someone on the inside.
I do already have some ideas about where I want to go with book 4, even though I haven’t begun writing it yet. I definitely want to get into some Egyptian mythos soon, but I don’t know if that will be in book 4 or 5. As a writer who doesn’t plan these things out, I’ll just see where it takes me.

If anyone wants to know what is coming down the pipeline, or get access to my beta reads, they should join my newsletter. There are links to it all over DiedraDrake.com and I don’t send it out all the time, usually once or twice a month (max!), but my newsletter people get everything first.