Maré and Monica: The Best of Both Worlds
by Gianni Shamari
Date of Publication: May 20th 2019 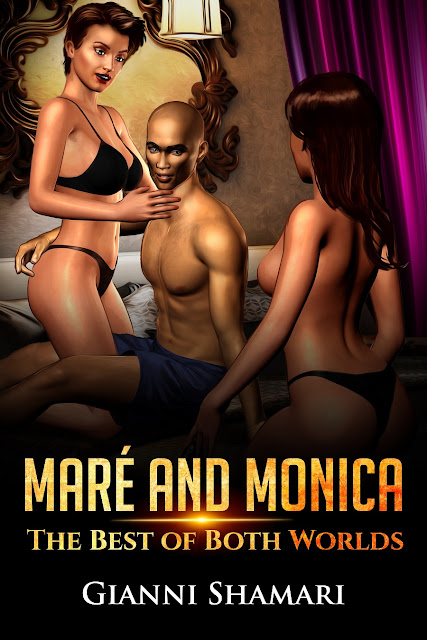 BLURB
Maré and Monica are the ultimate duo when it comes to pleasuring beautiful women. Dubbed the Best of Both Worlds, their pussy conquests are not only legendary, but epic! Adult film stars, glamour models and exotic beauties cannot get enough of the "Best of Both Worlds Experience" that leaves them trembling and writhing from the hot ecstasy that overwhelmed their luscious bodies.

The King of New York and The Predator are the greatest when it comes to sex.
These 18 short stories tell the tale of this dynamic duo's greatest sexual conquests and how they bonded over the years with each venture. Illicit trysts, hot lesbian action and explicitly dirty encounters are all in this collection of champagne erotica where it feels like you're in an action-packed erotic motion picture starring "Nature Boy" Maré and Monica "The Predator" Hershel. The Best of Both Worlds!
Amazon
Excerpt
"Honey"
“If I were to make your favorite dessert, what would it be?”
“Oh, shit this is a hard one because I’m a serious fat ass at heart.” Honey laughed. “Honestly, I really LOVE homemade cinnamon rolls.”
“Great.” Maré continued. “I can make those. I have a roommate. Her name is Monica, nicknamed The Predator. She looks exactly like Ruby Rose. She’s cool! Don’t worry, we never had sex and she’s not my friend with benefits. Monica is my homie!”
“That’s good to know.” Honey said.
“Her specialty is cunnilingus.” Maré hinted.
Honey blushed. “Interesting… I hope I meet her.”
In less than an hour, they entered One57, nicknamed “The Billionaire Building”, and soon walked inside the duplex penthouse. After removing their sneakers, Maré put his arms around Honey’s waist and gave her a tour of the extravagant apartment that occupied the 89th and 90th floors. The 360-degree views of Manhattan, the open living and dining rooms, eat-in chef’s kitchen with a hidden ceiling TV, and home theater really blew her away. The lifestyle of the King of New York was something a woman like her can easily get used to.
After the tour, they walked inside Maré’s master bedroom that had stunning views of Central Park. Honey was still in awe of his $100 million pad that floated above Manhattan.
“Six bedrooms, 7 baths, library and one impressive art collection that I have ever seen,” Honey continued. “You really are the epitome of living your best life, Nature Boy!”

“I’m the king of the city that’s living on top of the world. My blessings always keep me in a great mood.”
“You know what I’m in the mood for?”
“What?”
“I’m in the mood to do that dream scene with you.” She said, with a nuance of huskiness in her tone. “I want you now, Nature Boy!”
“Oh, yeah.” Maré licked his lips. “The best curve on a girl is her smile.”
Smiling, Maré clutched his muscular arms around her toned sweaty waist. They locked their lips in a French kiss, fondling each other along. The mood added erotic color to the cool ambiance of bedroom.
Monica looked leggy in her teeny black shorts as she entered the duplex. Her raven black short hair was groomed in a side-parted pixie cut that framed her pretty face. As she got closer to Maré’s bedroom, she could hear the sounds that hinted what was going on inside. Monica already knew that Maré was having a go with an eye candy.
“Sorry guys, I didn’t mean to intrude!” She said, gesturing up, as soon as the bedroom door closed behind her.
“Hey, what’s up?” Maré spoke up, laughing.
“I’m good. I just came back from a walk.” Monica continued. “I like when a beautiful honey is out with her man and she mean mugging me because she thinks I want her man. Silly! Never did she know I too adore her assets!”
Maré laughed again. “You’re damn true! This is my exotic goddess, named Honey.”
After an exclamation, they both exchanged smiles and greetings. Monica was about to leave the bedroom to take a shower until Honey said, “No, please stay! You’re so cute. Erm... mind if you watch us fuck?”
“Oh, really?” Maré was at the same time surprised and excited.

1 $15 Amazon gift card will be given away to someone who joins Emerging Edge Publishing’s newsletter http://emergingedgepublishing.com/contact_us  and for tweeting the following Tweet:

*One winner will be selected on June 1, 2019 from a random drawing. Winner will be notified via email and will receive a free $15 Amazon gift card via email shortly afterwards. The winner’s name will be posted on our social media sites on Facebook and Twitter. 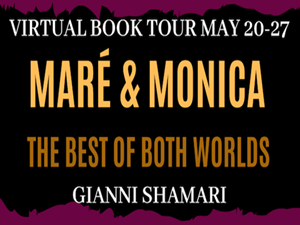