Yellow Locust
Book One
by Justin Joschko
Date of Publication: May 8th 2018 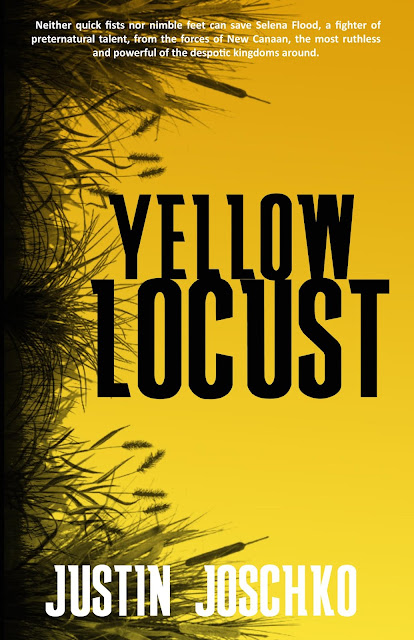 BLURB
Selena Flood is a fighter of preternatural talent. But not even her quick fists and nimble feet could save her parents from the forces of New Canaan, the most ruthless and powerful of the despotic kingdoms populating America-that-was.

Forced to flee the tyrannical state with her younger brother Simon in tow, Selena is now the last chance for peace in a continent on the verge of complete destruction.

In her pocket is a data stick, the contents of which cost her parents their lives. Selena must now ensure it reaches the Republic of California—a lone beacon of liberty shining across a vast and barren wasteland—before it’s too late.

Between New Canaan and California stretch the Middle Wastes: thousands of desolate miles home to murderers, thieves, and a virulent strain of grass called yellow locust that has made growing food all but impossible. So when Selena and Simon stagger into Fallowfield, an oasis of prosperity amidst the poisoned plains, everything seems too good to be true—including the warm welcome they receive from the town’s leader, a peculiar man known only as The Mayor.

As Selena delves deeper into the sinister secrets of this seemingly harmless refuge, she soon learns there is a much darker side to Fallowfield and the man who runs it. Before long, she must call upon the skills she honed in the fighting pits of New Canaan to ensure not only her own survival, but that of her brother, in whom the Mayor has taken far too keen an interest.

And she’d better act fast, for an all-out war inches ever closer, and New Canaan is never as far away as it seems.
Amazon

Excerpt:
The grass followed the siblings into town, looming silently along the highway shoulders, lancing up through broken sidewalk slabs, squatting in the cavernous lobbies of derelict skyscrapers. It stalked them all the way to the city center, where a square kilometer of turf and asphalt had been pared away to uncover the silty soil beneath. Stakes with tips painted green, blue, and orange still jutted evenly along the field’s southern edge, though whether the colors signified crop rotation or ownership, Selena couldn’t say. Only one plant grew there now, and she was willing to bet it hadn’t been deliberately planted. The yellow grass devoured every inch of naked soil, creating a neck-high carpet of brittle, oily stalks. We aren’t gonna find any food on offer here, Selena thought, though she kept this opinion to herself—the last thing her brother needed was more bad news.
A fountain stood on a cobbled square beside the field, its ledge chipped and weathered. A bronze woman stood atop its stone platform, her face tarnished and scaly with grime. She held aloft a jug with a broken handle. Water dribbled from its spout. No food, maybe, but water’s more important anyway.
Selena knelt to the water. A caustic stench of grease and bitter herbs rose from the pool. A skein of shimmery oil coated the water, stirred to a rainbow froth where the trickling spout spilled its endless contents. Selena rolled up her pant legs, removed her shoes, and waded into the fountain. The water’s scummy skin clung to her leg hairs. She cupped her hands beneath the dribble.


Even before the water touched her lips, she knew it was bad. The stench of it lapped at her face like a hungry tongue. She sipped anyway, gagged, spat. Running or still, the water was hopelessly befouled. Its taste and smell lingered long enough for her to place it: the smell of the yellow grass, the few times she’d been forced to push her way directly through it. Not content with razing the town’s crops, the vile stuff had also poisoned its water supply. Whatever this shit is, it’s thorough. 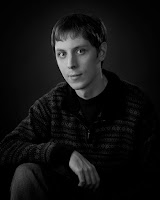 Author Info
Justin Joschko is an author from Niagara Falls, Ontario. His writing has appeared in newspapers and literary journals across Canada. Yellow Locust is his first novel. He currently lives in Ottawa with his wife and two children.

The Book Junkie Reads . . . Interview with Justin Joschko . . .
How would you describe your style of writing to someone that has never read your work?
Ornate, elegant, bristly with metaphor, potentially a little too fond of participle phrases. I like to think it’s pretty slick, but sometimes I go overboard and have to reel myself in. My thesis supervisor once told me he’d pay me to stop using so many similes. I stopped using them as much, but he never paid.

What are some of your writing/publishing goals for this year?
I have a weird habit of jumping between genres, and I’m halfway done writing a horror novel. I’d like to finish that and get the bulk of Yellow Locust 3 done this year.

Do you feel that writing is an ingrained process or just something that flows naturally for you?
I think it’s something I picked up after reading a ton of novels, and that I’ve improved with time. However, I also think there’s an initial spark that some people have and some don’t. Less an inherent talent than a drive that makes you keep writing and writing until eventually you can do a decent job of it.

Where would you spend one full year, if you could go ANYWhere? What would you do with this time?
I’d rent a house in a small village somewhere in Germany and immerse myself in the language until I spoke and understood it. My family is German, but when my grandparents came to Canada they stopped speaking it, also ich kann nur ein bisschen sprechen. Ideally it would be somewhere close to the border with France, since a) my kids are learning French (and mine has some room for improvement, too), and 2) I love croissants.

Can you share you next creative project(s)? If yes, can you give a few details?


The second book in the Yellow Locust series, IRON CIRCLE, is out this month, and book 3 is in the works. In the meantime, I’ve got a horror novel underway (see above) and another one already written, which I’d like to get published. It’s a story about werewolves set in my hometown of Niagara Falls.
www.justinjoschko.com
https://www.facebook.com/Yellow-Locust-184228472206563
https://twitter.com/justinjoschko 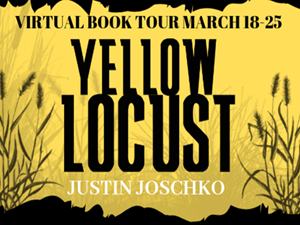