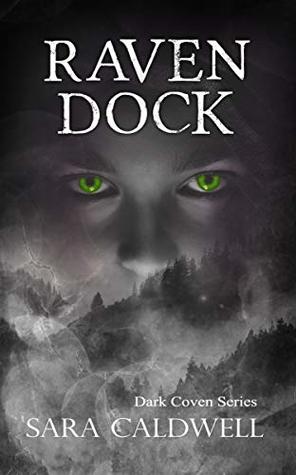 Seventeen-year-old Harper Duncan never fit in anywhere her family moved…and they moved a lot. But after her parents and brother die in a tragic accident, she finds out she’s adopted, and her birth mother lives in a remote retreat called Raven Dock. Harper ventures north and discovers a dark family secret: her birth mother is a witch. And she’s one too. As Harper Learns about her own hidden powers, will she choose to embrace her chilling heritage, or return to the safety of the ordinary world?

Goodreads
Amazon / Barnes & Noble
—
EXCERPT:
First Vision
When we finally entered the house, Olive began worrying I wouldn’t come back from my trip to visit Aunt Mary. I reminded her that I was only going for two weeks, and the retreat was in the middle of nowhere. I was a city girl at heart. I needed stuff to do, like going to movies, dancing to live music, and eating greasy hotdogs or gyro sandwiches. The thought of being stuck in some remote woodland frankly horrified me. I also wondered why Dad and his sister hadn’t spoken in so long. It must have been pretty bad to avoid each other all these years. Olive asked if I’d heard from Mary. I said not by phone, though I’d received a letter. Who knew people still wrote those?
I was surprised when Jeff had handed me the letter. You could tell that Mary handwrote it with a fountain pen, in neat cursive letters. Jeff was impressed. He loved old school stuff, like his prized LP collection. The letter was quite short. Mary wrote how sorry she was for my loss, how much she looked forward to seeing me, and that she was planning a big party in my honor. Olive made a bet that she’d serve herbal tea and quinoa. This made me laugh, but suddenly I felt dizzy.
“Are you okay?” asked Olive. Her voice seemed to come from far away. Everything was blurry. I blinked and suddenly found myself somewhere else. I wasn’t physically in this other place, just seeing it in a disembodied way, like in a virtual reality game. I was inside a school bus full of Mexican children, who were jumping between the seats as kids do. One little girl wore a white ribbon in her hair. She turned to look at me, with big brown eyes. She opened her mouth as if to say something.
“Harper?” I blinked again, and Olive was in front of me, looking at me quizzically. I didn’t want to freak her out about what I had just seen, even though I was shaking inside. I chalked it up to a hallucination. After all, I was a nervous, depressed wreck. My mind was undoubtedly on a slippery psychological slope. But it sure was a strange and vivid one. I made a mental note to ask Janet about it.
The strangeness persisted as we wandered through the empty house. It felt bigger without our stuff, and our bodies zigzagging through it with the business of each day. A thin layer of dust had built up on the wooden floors, which squeaked underfoot. I looked out the front window, to where the accident had happened. All the flowers and candles were finally gone, a painful reminder that life goes on. Jeff had taken me to the spot a few days after the accident, so I could appreciate the kindness of our neighbors and strangers, many of whom had left personalized notes.

Author Info
Sara Caldwell teaches screenwriting and digital media courses at College of the Canyons in Santa Clarita and the Fashion Institute of Design and Merchandizing (FIDIM) in Los Angeles. She has won many awards for her writing, including Best Original Screenplay at the Burbank International Film Festival. Sara has always been drawn to the supernatural and has produced a number of award-winning short horror films through House of Gorey Productions, along with her husband Walter Gorey. She is also a member of the Writers Guild of America (WGA).


Like Harper in Raven Dock, Sara spent her childhood as a tumbleweed, moving around the United States and even to Guatemala, Spain and England. She's run three marathons, authored three nonfiction books, and has three cats that enjoy perching on her shoulder while she writes at her kitchen table. It goes without saying that three is her lucky number. She's also working on the remaining novels for the Dark Coven series, the next of which is titled Darkest Hour.