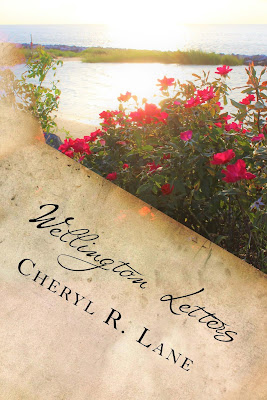 BLURB
This book follows William and Ginny's son, Liam, to Cuba in 1898 where he has joined Teddy Roosevelt's Rough Riders in fighting against Spain in the Spanish American War. As a field doctor, Liam will help many, see some die, and also surprisingly fall in love.

Meanwhile back at home at The Forest Plantation in Charles City, Virginia, his father Dr. William Brown reads Liam's letters to the family and is reminded of a story from the War Between the States.

This story involves his cousin Judy being a spy and how she fell in love with a Union soldier. As William tells the story to his family, a secret is revealed that even his wife Ginny doesn't know about.
Goodreads

Judy Wheeler is a cousin of Dr. William Brown, a familiar character in my Wellington Cross Series.  Judy’s mother Patsy and William’s mother were sisters.  Judy was first introduced in my book, Wellington Grove, and then also played an important role in my novella, A Wellington Christmas.  In Wellington Letters, we learn about the love story of how she, a Virginia woman, fell in love with a Union soldier during the Civil War, or War Between the States, as they liked to refer to it.

Judy was just fifteen years old when the War Between the States began in 1861.  By 1863, her father, two brothers, and cousin William had all gone off to war, and she and her mother lived alone at their family home in Petersburg, Virginia.  They had a two-story brick home on the Appomattox River with several dependencies.  One fateful day in June 1864, a lone soldier stumbled onto their front porch steps carrying a letter that he was unable to deliver.  Judy takes it upon herself to put the letter into the hands of Confederate Colonel Jackson.  First, she must get away from the Union soldiers who have invaded her family home.  She witnesses a death, is nearly raped, and has a run-in with a bear on this quest.  Not to mention entanglements with both Union and Confederate soldiers invading their home.  She and her mother end up in Colonial Heights tending wounded soldiers at the Dandridge home where they encounter death and disease.  Somewhere along the way, Judy falls in love with kind, blue-eyed Benjamin Morehouse, a Union soldier, much to the dismay of her family.

Would you be brave enough to date a man that your family didn’t like?  A man that you didn’t want to like, but you did because he had many good qualities like being brave, strong, kind, and true?  Judy did and tried her best to help her family – among others – see the good in Benjamin.

She started writing as a hobby when she was in college after purchasing a couple of Southern Heritage cookbooks, which were filled with pages of beautiful old plantation homes. She used to sit outside in her backyard and type on a manual typewriter at a picnic table under tall maple trees.

She continued writing after moving to Virginia Beach and visiting beautifully restored homes in Williamsburg as well as plantations on the James River. She has been working in medical and now legal transcription while writing on the side, and finally decided to self-publish her first novel in December 2012.  She enjoys the freedom and creativity of self-publishing.

She loves being outside in nature and her hobbies include visiting historical homes and gardens, reading, traveling, exercising, and going to the beach.  She is still married to her sweetheart after 29 years, and they have one son who is an actor and a Havanese bichon.
Author Links:
Website:  Twitter:   Instagram:   Goodreads:   Pinterest:
YouTube:   Amazon:
Facebook Author Page:
Facebook Wellington Cross Book Series Page: